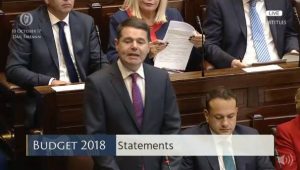 Some Budget 2018 measures have been welcomed by Irish charities, but many were considered insufficient to address the very real problems in health, housing and education, which exacerbate poverty and social exclusion.

This is according to Irish charities including the Society of St Vincent de Paul (SVP) which welcomed the increases in income supports, and in social welfare and housing supply measures, but was disappointed with how little was allowed for lone parent families, households with older children, and reduction of education costs. “Our experience is that reducing education costs is a major factor in helping to break the cycle of disadvantage.” said Kieran Stafford, SVP National President.

The SVP welcomed the reduction of prescription charges but would like them to be abolished. The Society also welcomed steps towards addressing housing supply but urged caution on Housing Assistance Payment (HAP). “There remains an over reliance however on HAP, when over 90% of rented properties are beyond the HAP limit whilst measures to increase the availability of affordable homes has not been addressed.” said Kieran Stafford.

Pat Doyle CEO for the Peter McVerry Trust said that the additional €18 million funding for homeless services and an increase in the Housing Assistance Payment (HAP) in 2018 are particularly welcome. He explained that the roll out of a HAP placefinders service nationally will enable more people to exit homelessness. “Minister Donohoe’s move to provide funding for the placefinders service is an important move as it means a dedicated support for people to secure HAP tenancies. The target for 17,000 additional HAP tenancies will however be very difficult to achieve, due of the shortage of rental units currently available,” he said.

He stated that the Peter McVerry Trust is happy with an increase in social housing targets up to 2021, but hopes that additional funding in 2018 and 2019 will front load new capital projects given the deepening housing and homeless crisis. On measures to encourage developers to build more housing, the Peter McVerry Trust welcomed the changes to commercial stamp duty and the vacant site levy, but was disappointed there was no empty homes tax.

“We feel that this is out of line with the Government’s vision and aim to significantly reduce the amount of homes and properties lying vacant around the country. The Peter McVerry Trust believes that empty homes provide an opportunity to bring about additional housing stock at a faster and more sustainable rate,” stated the charity. The charity also welcomed more funding for health, to help reduce class sizes, and for TUSLA to give vulnerable children an out of hours service.

Social Justice Ireland (SJI) stated that Budget 2018 has given modest improvements for some, but failed to get to grips with the scale of the crises needing to be addressed. 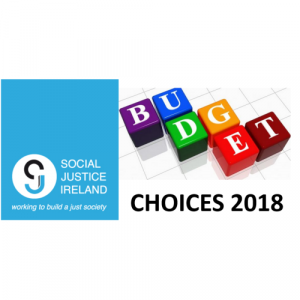 It highlighted the “grave and persistent challenges” faced by many including:

It also highlighted Ireland’s two-tier healthcare system and the growing divide between urban and rural dwellers. SJI stated that today, Irish people are reaping the consequences of choices made during the austerity years, and it is now time to use available resources of an expanding economy to tackle the infrastructure and service crises.

“Yet, the choices made in Budget 2018 will only make a small contribution in addressing any of these major challenges,” SJI stated. “Those engaged in budgetary policy had already acknowledged the seriousness of this current social crisis yet chose to cut income taxes which seems both perverse and contradictory. Irish people deserve better than this,” concluded SJI.