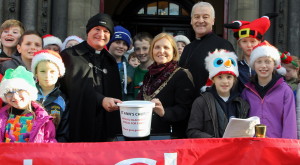 The 2015 Black Santa sit out at St Ann’s Church, Dawson Street in Dublin yielded a record breaking sum for charity.

A total of €41,400, the largest amount in the Dublin appeal’s 15 year history, was collected during the sit out which took place on the street outside the Dublin city centre church in the days running up to Christmas.

Every cent donated goes directly to the charities involved.

The funds will be distributed at a special service in St Ann’s today (7 February) at 11am. The preacher will be the Archdeacon of Dublin, the Ven David Pierpoint.

The Vicar of St Ann’s, Canon David Gillespie, has paid tribute to all who donated, collected, counted and offered hospitality during the appeal.

“It is an immensely humbling thing to act as a conduit between one person’s generosity and another’s need and, at the same time, to engage in conversation with passers-by, to receive their good wishes and hear something of their story and it is good to see so many familiar faces returning year on year, including some particularly well-known politicians and celebrities,” he stated.

“All in all, the 2015 appeal is, by far, one of the most memorable for a variety of reasons and serves as reminder to us of the importance of the witness of this city centre parish.”

The charities receiving money from the appeal have been invited to attend the Black Santa Service today.

Every cent of the €41,400 collected will be divided among them.

The Black Santa sit out is modelled on a similar appeal, which has been run by successive deans of St Anne’s Cathedral in Belfast for many years.

It became known as the Black Santa appeal because of the long heavy black cloaks worn by the clergy to keep out the cold.