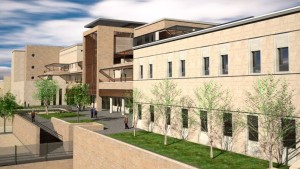 A new project which is backed by Opus Dei aims to bring people from all over the world to the Holy Land.

The Saxum Project involves the construction of a huge conference centre in Israel nine miles from Jerusalem on the road to Emmaus.

The 75,000 square foot centre, currently under construction and due to be completed by the end of the year, includes a retreat house with 50 single bedrooms, a chapel, cafe and multimedia centre.

In Ireland, members of Opus Dei have been holding informal meetings, inviting their friends, in order to garner support for the centre which will act as a retreat, pilgrimage and information centre.

“People like to do something in the context of helping Christians in the Holy Land,” Paul Harman, Opus Dei Information Officer told CatholicIreland.net

“They are concerned about the Middle East. They see the suffering of the people and see this as a way of helping.”

The next Saxum presentation is in Limerick in the Strand Hotel, Ennis, on 29 April at 7.30pm.

Mr Harman says people are being generous. “We are getting lots of pledges, for example a family might be moving to a smaller house, and they say ‘When I move, I’ll give you the money.’ I think it is better to get people to pledge money because generally speaking, they get more engaged and do more.”

The Saxum project is inspired and named after Venerable Alvaro del Portillo, the second leader of Opus Dei, who was beatified last September in Madrid.

The name Saxum, which is Latin for ‘bedrock’, is a nick name the founder of Opus Dei founder, St Josemaria Escriva, used for Bishop del Portillo, who visited the Holy Land just a week before he died in 1994.

“Saxum is intended to be a focal point of spiritual renewal and catechetical formation thus leading many people into a deeper encounter with Jesus Christ,” says Bishop Javier Echevarria, the current head of Opus Dei.

“It desires to become an instrument of peace and unity in this region of the world.”

The project has been welcomed by Christian leaders in the Middle East.

Bishop Fouad Twal, the Latin Patriarch, sees it as an instrument for the “new evangelisation”.

“Together we work in creative ways to welcome many pilgrims from around the world as they seek to encounter Jesus Christ in the Holy Land,” he writes.

Fr Pierbattista Pizzaballa, the Custodos, or leader of the Franciscan friars in the Holy Land writes that many Christians have been “touched by the grace of God in a very special way” during visits to the sacred sites of the Holy Land.

“Every site that carries the memories of Jesus’ life is an instrument for the Holy Spirit in the conversion of hearts.”

For more information see www.saxum.org. The website includes a live webcam streaming showing the progress in the building project.