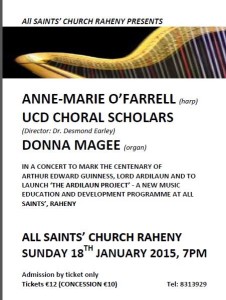 The Church of Ireland parish of All Saint’s in Raheny is to mark the 100th anniversary of the death of Arthur Edward Guinness (Lord Ardilaun) with the launch of the ‘Ardilaun Music Project’ next weekend.

On Sunday 18 January, the Archbishop of Dublin, Dr Michael Jackson, will attend a concert at the parish by Irish harpist, Anne-Marie O’Farrell, the UCD Choral Scholars and organist and traditional Irish musician, Donna Magee.

The concert will form the backdrop for the launch by Minister of State, Aodhán Ó Ríordán, of a new Music Education and Development Project at All Saints’ aimed at enabling young people from north Dublin engage with choral and musical development.

A great-grandson of Arthur Guinness, founder of the brewery, Lord Ardilaun was a businessman, politician and philanthropist and is best known for giving St Stephen’s Green to the people of Dublin.

Lord Ardilaun also funded the building of All Saints’ Church in Raheny which was built on the grounds of his estate at St Anne’s and is regarded as an architectural gem in the Dublin Diocese.

Speaking ahead of the concert, the rector of All Saints’, Rev Norman McCausland said, “The concert marks the significant anniversary of the end of the life of Arthur Edward Guinness but the occasion also looks forward to the beginning of something new.”

“The ‘Ardilaun Music Project’ will provide opportunities for choral development especially with young people while also engaging in a collaborative way with traditional Irish music performers and composers. This will be a major addition to the cultural life of north Dublin and we are delighted to make this contribution to the Decade of Centenaries”.

The project will be funded by subscriptions and by income from a regular series of concerts.