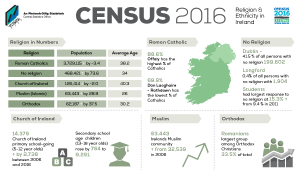 Roman Catholics form the largest religious denomination in the Republic of Ireland according to the latest figures released from the April 2016 census,  but the percentage of people identifying as belonging to the church is falling.

When the census was taken, there were 3,729,115 Catholics in the State, which equates to 78.3% of the population. This figure is down by 132,220 from the number recorded in 2011.  For the last few censuses, the proportion of people identifying themselves as Catholic has been falling by about one or two percentage points every five years, but this time the drop is almost six percentage points.

While the number of people identifying as Catholics is falling, there is still no question that the ‘Catholic Ireland’ label still applies, as the proportion of the population identifying themselves as Roman Catholic is higher than the Western European average of 55.4% or even the average in Central Europe which stands at 74.8%.

In response to the census question about religious identity, the second largest category of people are those who say they have ‘no religion’, a grouping that for statistical purposes, includes those who identify as atheists or agnostics. These now form about 10% of the population or 481,388 people, a number that has significantly increased since 2011 when 204,151 people identified as such.  Notably perhaps, those within the ‘no religion’ grouping are younger than the general population, on average by a factor of 3.4 years.

With 126,414 members in the Republic, the Church of Ireland comprises just over 2.75% of the population. According to the CSO, there has been a very slight decline in its numbers (2%), but it notes that the average age of CofI members, 40.3 years, is nearly three years older than the general population.

One area where Catholics were found to be different from the general population according to the census figures, is that we have a lower divorce rate. The divorce rate among those identifying as Catholic is 4.1% in comparison with a divorce rate of 4.7% in the general population.  Interestingly, nearly an eighth of Ireland’s Catholics, 12%, were born outside the state – how many of these are people who have just crossed the border from Northern Ireland and how many are people who have come from further afield, for example Poland or the Philippines, isn’t as yet clear.

The census recorded 63,443 Muslims living in Ireland in April 2016, an increase of 28.9% in the space of five years. Notably more than a quarter of Muslims are aged between five and 18, indicating that it is a fast growing faith group. More than four out of every 10 Muslims live in Dublin city and its suburbs.

There were 2,557 Jews living in the state – notably this number has increased for the first time in many censuses, indicating that the population here may be stabilising or recovering.

All in all it means that modern Ireland is a more multi-cultural place than it has ever been before.