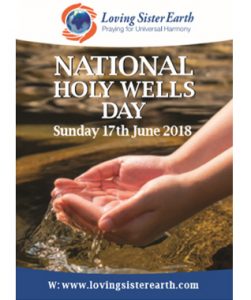 The sacredness of water and the tradition of holy wells will be celebrated on the second National Holy Wells Day on Sunday 17 June 2018.

The promoters of the event, Loving Sister Earth, take their inspiration from the 2015 papal encyclical, ‘Laudato Si’.

In it, Pope Francis states “access to safe drinkable water is a basic and universal human right, since it is essential for human survival, and as such, is a condition for the exercise of other human rights” (LS 30).

Responding to Pope Francis’ call for everyone to take responsibility for ‘Our Common Home’, Loving Sister Earth is inviting people in Ireland to reconnect with the Celtic spiritual tradition of gathering to pray at Holy Wells.

The organisation calculates that there are about 3,000 such wells scattered across the country.

“Our spiritual heritage, which runs in us all, is part of how we have evolved,” Elaine O’Leary, one of the core group, explained.

“(We are) inviting people to come back to that sense of values, to pray at these holy places that have a huge history of prayer in them – there is an energy of prayer in these places. We are responding to Pope Francis as well who has asked that everyone do something.”

The annual National Holy Wells Day (NHWD) organisers invite people to visit their local holy well and pray there for the protection and fair distribution of water.

Alternatively people can pause at midday to pray for and celebrate the gift of water or simply drink a glass of water mindfully “wherever they happen to be and think of what changes they can make to conserve it. The invitation is to pray and act for all of creation – humans, fish, birds, animals and plants – all need clean water.”

The Loving Sister Earth group began five or six years ago as a movement according to Elaine O’Leary.

It involves people from parishes, religious orders and individuals. A core group of four are based in Dublin and the Columba Community in Derry. They have helped spread the word for NHWD around Northern Ireland. Those involved play their part through prayer and action.

“We all have a deep understanding of the spiritual side of all this, and the power of prayer that can change things but can then motivate people to do something,” said Elaine O’Leary.

“They (holy wells) all have a tradition that the local people will know, so we are not telling anyone to do anything, we are trying to encourage people.”

She said that a Holy Well in Galway was restored to use last year and another in Roscommon is expected to be ready for this year’s event.

The first NHWD last year was small, as it was the first one, but it involved people visiting wells in Kildare (St Brigid), Knocklyon Dublin (St Colmcille) and in Derry’s Bogside (St Columba), and many more places.

Elaine O’Leary hopes that in the future other countries outside of Ireland will find their own way to highlight all the issues around water, which increase every day.

At the moment the main concerns are drought in some areas of the world, flooding in others, pollution and plastic in our oceans and in some countries large corporations have control over water supplies in certain areas and towns.

Details of rituals, prayer cards and further resources are available on: www.lovingsisterearth.com