The Ceann Comhairle, Seán Ó Fearghaíl, this week launched the ‘Ceann Comhairle Project for Africa’ project, a special fund which aims to raise an initial €50,000 for Trócaire to tackle drought and urgent need in northern Ethiopia. 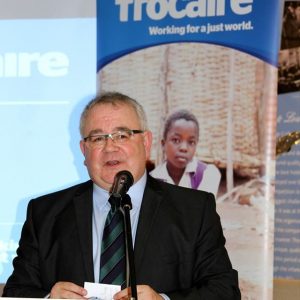 Speaking at the launch, Mr Ó Fearghaíl said “It is my hope that this initiative will continue and expand under future holders of the office of Ceann Comhairle.”

It is hoped that the fund will allow Trócaire to bring support to 7,000 people in drought-affected areas of Ethiopia. Mr Ó Fearghaíl said “I have seen for myself the devastating effects on millions of people facing extreme food shortages in communities vulnerable to drought and so, as sponsor of this project, I am pleased to launch this new and innovative ‘Ceann Comhairle Project for Africa’.”

He described how, through charitable donations, “this project aims to put in place a long-term response to the impact of climate change on vulnerable communities in the Enderta District in Tigray, northern Ethiopia. People there simply do not have enough food to live and it is hoped that this project will directly benefit 1,200 families, or 7,000 individuals. It is about introducing sustainability for the most vulnerable communities in Ethiopia through building irrigation systems that will ensure that farmers have at least the minimum amount of water to grow and harvest crops.”

Sean Farrell of Trócaire said: “There are currently over nine million people in Ethiopia facing food shortages due to drought. The Ceann Comhairle Project for Africa fund will greatly help us to build irrigation and supports that can ensure that people do not face this situation again. We are delighted that the Ceann Comhairle has chosen to work with Trócaire on this very special project and would like to thank everybody who has expressed an interest in supporting this initiative.”

The Ethiopian Ambassador to Ireland, Lela-alem Gebreyohannes Tedla, expressed her gratitude for this project and she pointed out the huge strides that had been made in Ethiopia in recent decades. To support the Ceann Comhairle Project for Africa fund, email [email protected].