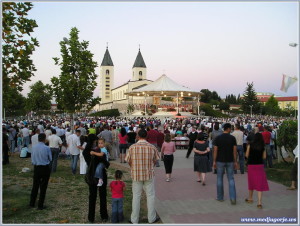 The Apostolic Nuncio to the US, Archbishop Carlo Maria Vigano, has issued a stark reminder to the American bishops that the Vatican’s has yet to give any formal recognition to the alleged Marian apparitions in Medjugorje.

In a letter to the general secretary of the US Conference of Catholic Bishops, Mgr Ronny Jenkins, Archbishop Carlo Maria Vigano said he was writing at the request of Archbishop Gerhard Müller, Prefect of the Congregation for the Doctrine of the Faith.

The reminder was issued as one of the Medjugorje visionaries, Ivan Dragicevic, was due to undertake a tour of US parishes.

The October tour, which would have included Ivan Dragicevic purportedly receiving his daily visions of Our Lady in public, was cancelled as the news of the correspondence from the Nuncio to the bishops emerged.

The CDF has said it is not yet possible “to state that there were apparitions or supernatural revelations” by visionaries in Medjugorje.

Ivan Dragicevic is one of six children from the village of Medjugorje who claim they first saw Our Lady in June 1981.

Most of the Medjugorje visionaries claim the apparitions continued every day for years.

Three of the six say they still have visions each day, while the other three see Our Lady only once a year now. All six are now married and have children.

A Vatican commission is currently studying the events of Medjugorje.

Tags: Congregation for the Doctrine of the Faith, Marian apparitions, Medjugorje, visionaries