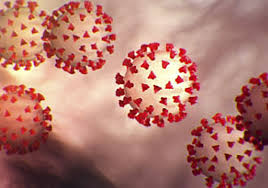 A microscopic image of the COVID-19 virus

Half of Catholics have said that the recent lockdown had helped them to feel closer to God (50 per cent) while more than half felt more prayerful (54 per cent), according to a new survey in the UK.

The survey conducted on behalf of Catholic Voices also found 93 per cent of those surveyed had accessed church services online during the COVID-19 pandemic. However, this high figure is probably influenced by the fact that the survey was online and distributed through church bodies.

While there was huge involvement and interest in worship online (66 per cent) during the lockdown, only 4 per cent said that they would worship mainly or totally online in the future. Organisers of the survey concluded that there is therefore little danger of a mass exodus to the virtual world for worship.

“Many it seems, by and large, have backed the bishops, been grateful for the efforts of clergy to livestream, and many have even felt at times closer to God and been more prayerful than usual. That said, the challenges ahead are real, so if we want to capitalise on this goodwill, we need to start thinking seriously about the conversations that need to happen as more and more begin returning to parishes.”

The survey also looked at where people found online worship. The part of the survey which included other denominations found that of those surveyed from the Church of England, more had accessed services provided by their own parish or local church. Catholics were more likely to access services from a parish that was not their own, and less likely to use services outside their denomination. They took part in services such as those provided by the Vatican, various religious communities (including L’Arche and Taizé), and from across the global church, especially the USA.

Catholic Voices said the findings suggest that the experience of Catholics differs from the speculation in some quarters that British Christians as a whole enthusiastically celebrated the replacement of the activities of the Church with online provision.

“Catholics miss their churches. In particular, it seems that younger Catholics were more likely to be opposed to lockdown and felt more strongly about the importance of church buildings than did older people who were surveyed,” stated Catholic Voices.

Many of the Catholics polled (63 per cent) had had some contact with clergy or a lay representative during lockdown ranging from pastoral support, practical help, prayer, church admin, or just checking up.

The survey took place between 19 May and 26 July, with more than 2,500 Catholics questioned about their experiences and attitudes towards responses to the COVID-19 crisis.

“It has been a pleasure to work with Catholic Voices to undertake what may be one of the biggest surveys ever undertaken of the Catholic community in England and Wales,” said Professor Francis Davis. “We wanted to find out how Catholics had been coping and what impact the crisis has had on people’s faith and their attitudes towards the Church. I am convinced that the report and its findings will be a vital resource in the discussions about the future of the Church in England and Wales.”

The survey, which is part of a wider survey of UK Christian responses to the present crisis, was undertaken by Professor Francis Davis (University of Birmingham and Oxford), Professor Andrew Village (York St John University) and Professor Leslie Francis (University of Warwick) who collaborated with Catholic Voices to publicise the survey and produce the report.

Catholic Voices (CV) was established in 2010 at the time of the papal visit to improve the Church’s representation in the media, above all in news programmes and debates. Since then, 20 CV groups have been set up in different countries in Europe, the Americas and Australia, and a similar group is present in Ireland.