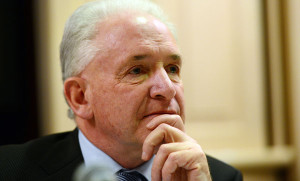 Representatives of reform Catholics in Ireland and elsewhere around the world have written to Pope Francis asking him to help them keep their parishes open.

The Open Letter, signed by Fr Tony Flannery, as well as other leaders of reform groups in America, Austria, Germany and Australia, calls attention to the widespread policy of merging, clustering and closing parishes as a way of countering the shortage of priests.

The letter tells the Pontiff that hundreds of parishes have been merged or closed in New York City, Philadelphia, Boston, Cleveland and beyond.

As Pope Francis prepares for his papal visit to the US, members of FutureChurch, a national coalition of parish centred Catholics in the US highlights how more than 70 parishes have been merged or closed in the Archdiocese of New York, often in the face of opposition from parishioners.

Deborah Rose-Milavec, Executive Director of FutureChurch, which provides resources and support to parishioners who want to keep their churches open said that, “When the Pope visits Our Lady Queen of Angels (OLQA) School in East Harlem in just a few weeks, he will learn that the Church was tragically closed in 2007 amid protest.”

She said that in the years that followed, two funerals, one for Carmen Gonzalez and the other for Carmen Villegas, both courageous leaders working to keep OLQA open, had to be held on the sidewalk in front of the closed Church when the bishop refused to unlock the doors.

“It is the story of these faith-filled women and the rest of the community working to keep their parish alive, meeting the unrelenting indifference of those who are supposed to pastor that will break your heart,” said Rose-Milavec.

“I hope the Pope will meet with parishioners from Our Lady Queen of Angels, Our Lady of Peace Church in Manhattan, St Peter Claver in Philadelphia, St Francis X. Cabrini in Scitaute and other closed parishes,” said Rose-Milavec.

“If he wants to learn about the devastation of faith life and the human cost of these corporate policies, he should sit with the many courageous Catholics who have been working for years to keep their parishes intact, and listen their stories.”

Fr Tony Flannery, founder of the Association of Catholic Priests, warns that “the problem we have in Ireland is clustering of parishes, leading to added pressure on aging priests, and inevitable amalgamation, and formation of bigger, more impersonal, units.”

“Clustering is a way of trying to keep the show going with older priests but it will inevitably lead to where the Americans are at now which is the wholesale closure of parishes, particularly in the archdiocese of New York,” he warned.

Fr Ian McGinnity, Chairman of the National Council of Priests points out, “In Australia, which is a vast land with the tyranny of distance, many rural communities do not have resident priests and only have access to the Eucharist on a monthly basis.”

“In our populous urban areas, parishes have had to be amalgamated due to the shortage of priests which has not only placed additional burdens on an already overworked pastor, but also has subsumed some churches unique identity and community.”

Fr Helmut Schüller, spokesman for the Pfarrer-Initiative in Austria, points out that the Catholic Church is at a crossroads and that those in leadership must provide the necessary priests or develop new forms of community leadership.

He notes how Bishops’ conferences are keeping to their defensive administrative strategy of merging independent parishes into vast, impersonal parish associations stating, “That is pretty much the most unimaginative thing one can do.”

Fr Wolfgang Gramer Rottenburg-Stuttgart representing the Deutsche Pfarrer-Initiative remarks, “In Germany I can see clearly that our priest numbers are declining every day. But I also recognise that there is a real chance that a Christian parish will discover the way of the Holy Spirit and see new forms of living the gospel – either with or without a priest. We still possess many members with special gifts, and we must find ways of allowing these gifts to flourish in the service of the community.”

Dr Markus Heil, Deacon and Chairman of Pfarrei-Initiative in Switzerland notes, “In the beginning clusters looked reasonable, but the longer the process went on, the smaller parishes in the cluster felt increasingly neglected. At the same time they began to wonder if they were really part of a future strategy, or whether the real plan was to allow them to starve, merge and disappear. As they are not aware of any clear future plan it is difficult to organise and mobilise. In the end, they just disappear.”

According to the reform leaders the policy of closing and merging parishes that relies on a corporate model of Church rather than a pastoral one is widespread and is slowly extinguishing the richness of the body of Christ in the world today.

Kate Kuenstler, a canon lawyer who helps parishioners who want to use the appeals process to keep their parish communities intact suggests, “The parish reconfiguration process used by dioceses most often has a business mentality, caught up with management, statistics, plans and evaluations whose principal beneficiary is not God’s people, but the church as an institution.”

The Open Letter petition can be found at http://action.groundswell-mvmt.org/petitions/pope-francis-help-us-build-the-church-by-keeping-our-parishes-open