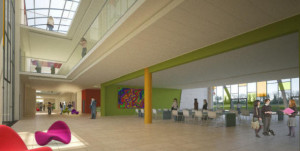 A new voluntary catholic secondary school has opened in Doon, Co Limerick, under the Trusteeship of CEIST.

Scoil na Trionóide Naofa is the first voluntary catholic secondary school of its kind that has been opened in more than 20 years.

The principal appointed for the new school is Eilis Casey and the deputy principal is Roger Corcoran.

Ms Casey worked as deputy principal at the former all girls’ school, St Joseph’s, and told CatholicIreland.net that all three schools have co-operated with each other over the years.

“We are very happy to bring the traditions of the other schools within the CEIST value system,” she said.

“Our vision of education is centred on the person,” she explained. “It is centred on taking care of the vulnerable and the weak. It is also centred on justice, that is essential to all our work and it is enshrined in all our policies.”

The amalgamation is particularly challenging as the new school buildings will not be ready until February 2014 and classes are currently spread between two schools. The new building is funded under a public-private partnership.

660 male and female students from Counties Limerick and Tipperary attended at the start of the new term. Boys and girls are mixing for the first time and there will be capacity for 850 students in total. Preparations are underway for the move to the new campus in February.

CEIST offered its best wishes all of the staff in what it called an “exciting new era for the school” and expressed its appreciation to all those who have brought the project to fruition, including the staff, past and present of St Joseph’s, St Fintan’s and St Michael’s College and the past principals, John Kinsella, Eddie Bourke and Michael O’Connor.

It also offered special thanks to the Mercy congregational leaders; the Edmund Rice Schools Trust; past and present Boards of Management; Chairpersons and members and CEO of Co Limerick VEC.