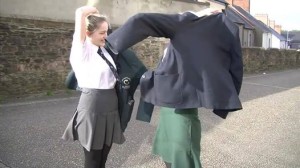 Catholic and Protestant students from Derry have stepped into one another’s shoes and changed school uniforms for a documentary which explores the divided society in Northern Ireland.

In the film, two girls put on each other’s uniforms and walk around Derry to experience the reactions of people around them.

The students state that the war in Northern Ireland is over but add: “we live in peace but we live apart.”

They suggest that the next generation of young people should not be segregated as they were.

“If we had met as children I’m sure we would be friends,” said one of the students.

“What if all the children starting school today in our country weren’t separated like we were? What if they sat beside someone from a different religion on day one?”

The film, In Peace Apart – Teaching Divided Histories, is part of a project run by the Nerve Centre in Derry and it has been entered in a competition in Boston.

In it the students describe Derry as the Walled City, and one which is divided on religious, geographical and cultural lines and speak of how it can be “Irish against British, Catholic against Protestant, Green against Blue”.

A telling moment is when two of the girls exchange and take a walk through the streets of the city to experience life from another perspective.

The actual act of changing uniforms made the girls feel different about themselves.

The narrator describes the Peace Bridge across the River Foyle as a “symbol of a new beginning” and says that while their generation has not seen the violence and conflict of the past with their own eyes, they have been “shaped by its legacy”.

The Nerve Centre’s Teaching Divided Histories programme uses digital technology to pass explore all sort s of topics ranging from the civil rights movement during the conflict, the 1916 Easter Rising, the Battle of the Somme and international conflict.

The Centre’s future work is under threat by Stormont arts budget cuts.

BAFTA winning Hollywood director Paul Greengrass (The Bourne Supremacy) has just voiced his support to the campaign to protect the centre’s education programmes from devastating budget cuts of up to 50%.

He met young film-makers in Derry in 2013, at a screening of his Oscar-nominated drama ‘Captain Phillips’, starring Tom Hanks. Paul Greengrass has made films in Northern Ireland about Bloody Sunday and the Omagh bombing.

He has urged the Government not to go ahead with cuts to education programmes that help young people get into the film and creative industries.

He said that the city has emerged from dark days to stand as a beacon of hope not just for Ireland and the United Kingdom but for Europe and far beyond.

He registered his strongest protest at the extent of the proposed cuts to the education and film sector in Northern Ireland.

For more about the Nerve Centre’s work and a link to the film see: http://nervecentre.org/