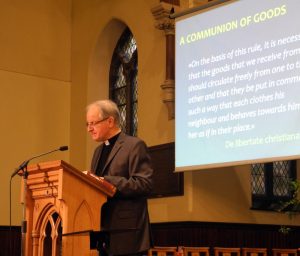 Rev. Hubertus Blaumeiser speaks of Light from the life and work of Martin Luther at Fitzroy Presbyterian church.

“You would go a long way before you would find a Catholic priest theologian talking about Martin Luther in a Presbyterian church in Ireland or in the world anywhere,” said Michael Dalton from Cullybackey Methodist church following a recent lecture on the German reformer in Belfast.

Up to 200 people attended the talk – Light from the Life and Work of Martin Luther – at Fitzroy Presbyterian Church by Fr Hubertus Blaumeiser, a German theologian, last week.

The congregation, which listened in rapt silence, included Christians from many congregational backgrounds – Baptist, Pentecostal, Presbyterians, Church of Ireland, Methodist and Catholic.

Among these was Bishop Noel Treanor of Down and Connor, who noted that for centuries Martin Luther had been a “figure of division”, and yet here Christians were “coming together and rediscovering a monk who was a Catholic, a reformer, a figure around whom much unity in faith is being re-forged.”

In his talk Fr Blaumeiser focussed on Martin Luther’s “light” under five headings: light on God; light on the vocation of the human being; light on the Way; on Life; and on the Truth.

With the impact of the plague, disasters and wars, the prevalent idea at Luther’s time (early 16th century) was of an “unpredictable God” who could “have predestined some for salvation and others to damnation.” Luther then made his great discovery that “God’s justice is not like human justice which gives to each one their due, punishing the wicked and rewarding the good; but is revealed as making the wicked good and sinners just,” said Fr Blaumeiser.

“God is not an accountant, noting down all the good and all the evil that we do and then working out the sums; but God – Luther says – is a burning furnace full of love, which stretches from earth to heaven.

“With his life and his work Luther invites people to purify their image of God – from a distant God and Judge, to a merciful God,” Fr Blaumeiser said, adding: “It is not difficult to find here some strong parallels between Luther and the message of Pope Francis.”

Luther’s “light” on being human is expressed in an “overwhelmingly simple way: to become Christ for the other,” said Fr Blaumeiser.

He quoted Article 27 of the Treatise “Concerning Christian Liberty” (De libertate christiana): “Therefore, as the Heavenly Father helped us in Christ freely, so we also have to help our neighbour freely … and become in a certain way Christ for the other.”

For Luther, this was a practical love. “All goods have flowed and flow from Christ to us. He has clothed us and has acted in our favour, as if he were truly what we are. Gifts should flow from us to those who need them.”

The law of love and mutual service, according to Luther, was not only the vocation of the human being but of the whole cosmos, said the German theologian, quoting a passage Luther wrote commenting on the psalms: “There is no tree that bears fruit for itself, but it offers its fruits to another. Indeed, no creature lives for itself and serves itself (apart from humankind and the devil). The sun does not shine for itself and water does not flow for itself. Thus, every creature observes the law of love and all its very consistence (substantia) is in the law of the Lord.”

Commenting on Luther’s “light” on the way to God, Fr Blaumeiser said that classically the ascent to God was a ladder made of many steps leading to Heaven, “where asceticism, human effort, came before mysticism” – the encounter with God.

Luther reversed this process. It is God who descends among us and comes close to us wherever we are. “Our most innermost self, our heart, must become good – and this is the work of God that comes about by pure grace if we entrust ourselves to him. Then he can, indeed he must, produce good fruit, or rather works inspired by a truly disinterested love,” explained the German theologian. 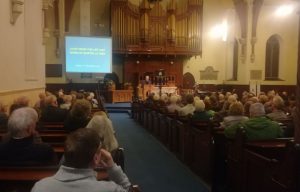 Luther’s insights for Christian life saw that to be fully human we must be projected outside of ourselves. “The human person, according to Scripture, and especially according to Paul, does not have its centre in itself but outside of itself,” said Fr Blaumeiser, concluding his talk with the final thesis from Luther’s De libertate Christiana (“Concerning Christian Liberty”): “From all of this we reach the conclusion that a Christian does not live in himself, but in Christ and in his neighbour: in Christ by faith; in his neighbour by love. By faith he rises above himself into God; from God he turns to descend beneath himself out of love; even as he remains always in God and in the divine love.”

In questions after his talk, Fr Blaumeiser, who is part of the Focolare movement, spoke of Pentecost. “The people who lived Pentecost had lost everything. All their certainties had collapsed but that opened them up. They put their trust in God (praying together) and then the Spirit could come down. We have to have the courage to descend, as God descended, descend before others.” And he quoted what Pope Francis said at the end of the week of prayer for unity: “There will be no reconciliation if we don’t receive one another, if we don’t begin to learn from one another.”

The event, marking the 500th anniversary of the Reformation, was co-sponsored by the Corrymeela Community, the Focolare Movement and the Clonard–Fitzroy Fellowship.

Afterwards, an elder from Fitzroy, Paul Lutton, spoke of the strong spirit of unity in the room during Fr Hubertus’ address. “I think that idea of Pentecost, that diversity in unity, will stay with us all, that image. It was really powerful for me.”