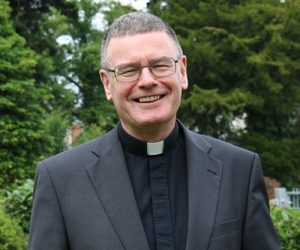 For the first time, a Catholic priest has been appointed canon at a Protestant cathedral in Belfast.

Speaking to Roisin McAuley on BBC Radio Ulster, Fr O’Donnell said he was very surprised by the appointment.

“It never crossed my mind and when Dean Mann rang me, I wasn’t able to respond. I was shocked but very pleased to accept the appointment.”

Under the statutes of the Church of Ireland, an Ecumenical Canon at the cathedral may say or sing Morning or Evening Prayer or the Litany; read Holy Scripture; deliver an address and assist at occasional services.

The Ecumenical Canon holds office until they resign from the office or cease to be a full–time minister or accredited preacher.

Currently St Anne’s cathedral has two ecumenical canons, one a Presbyterian the other a Methodist.

“It is the fact that this has happened, it is the symbolism of the appointment – that is the most important thing,” Fr O’Donnell told the BBC.

Across the world, division and fear are on people’s minds, commented Dean John Mann. “Do we go down these roads of division and fearfulness or work towards greater unity and co-operation?” he asked.

“If this little step helps us towards coming together in Christian fellowship, that is all to the good.”

Symbolic acts made as churches together are important, said Fr O’Donnell.

“Pope Francis has recently spoken of the ‘ecumenism of blood’. Thousands of Christians die every year because they are Christians. Those who persecute Christians don’t ask if they are Protestant or Catholic or Orthodox.”

Asked if he would be bringing members of his own congregation to St Anne’s Cathedral when he preached, Fr O’Donnell said one always welcomes “a bit of support!” but he added in South Belfast there were very good relations between the churches.

“We move around each other’s churches especially during Lent so there is nothing new in members of my parish coming to St Anne’s.” Some already do so for the cathedral for the Even Song and Morning Prayer.

Irene Jovaras was present at the installation service on Sunday.

“It was a real joy to be part of what seemed a landmark moment in the journey of reconciliation and peace for Belfast,” she told CatholicIreland.net.

“I experienced a  deep sense of gratitude to all those who have lived,worked and suffered to contribute to fulfilling Jesus prayer…’That All May Be One’.”

Ms Jovaras, who is part of the ecumenical Focolare movement, said that Fr Eddie had “a real gift for proclaiming the word of God as we hear his homilies each Sunday. It is good that this gift is extended to the wider Christian community”.

In a statement the Catholic diocese of Down and Connor expressed its appreciation for the “symbolic gesture of communion which demonstrates an ongoing commitment to work together for peace and reconciliation, building bridges across a divided community”.

Congratulating Fr O’Donnell, they said the installation recognised “his personal contribution to ecumenical engagement over many years of ministry and the fraternal friendship extended by the clergy and parishioners of St Anne’s Cathedral to Fr O’Donnell, St Brigid’s Parish and the Diocese of Down and Connor.”

“This historic appointment strengthens further our common mission to witness to Christ and the promotion of reconciliation, peace and unity.”

Fr O’Donnell is a native of Magherafelt. He studied in St Malachy’s College, Belfast, and St Kieran’s College, Kilkenny.

In June 1976 he was ordained priest for the Diocese of Down and Connor, and recently celebrated his 40th anniversary as a priest.