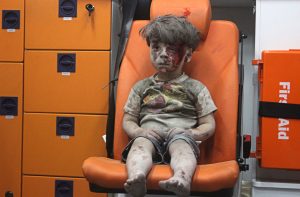 A prominent catholic peace activist has urged Irish social justice and peace groups as well as humanitarians to support a rally this weekend to highlight the plight of the people of Aleppo.

Brendan Butler, who was a member of the Irish El Salvador support group, the Algeria support group and also helped organise the massive 2003 protest against the war in Iraq, is organising the protest outside the Russian embassy in Dublin on Saturday lunchtime.

Speaking to catholicIreland.net, the retired school teacher explained, “We’ll be handing in a letter demanding an end to the bombing of Aleppo – it must stop because it is a war crime and an affront to humanity.”

He continued, “We cannot sit on the fence any more on this issue – we must stand up to this indiscriminate killing of people whether it is Russia or America that is responsible.”

The father and grandfather said one of the prime motivations behind his decision to organise the rally was the heart-breaking image of 5-year-old Omran Daqneesh, one of five children injured during an air strike last week in the northern Syrian city.

“I felt I had to do something about it. These are war crimes – it is a matter of human rights. You have to stand up for human rights.”

He said he also supported the UN’s demand for a truce in order for food and medicine to get through to the suffering civilian population.

The protest begins at 1pm and ends at 1.30pm and will be held at the Russian Embassy in Rathgar in Dublin.

The Syrian war grew out of the unrest of the 2011 Arab Spring and escalated to armed conflict after President Bashar al-Assad’s government violently repressed protests calling for his removal.

The war is now being fought among several factions: the Syrian Government, a loose alliance of Syrian Arab rebel groups, the Syrian Democratic Forces, Salafi jihadist groups (including al-Nusra Front) who often co-operate with the rebels, and the Islamic State of Iraq and the Levant (ISIL).

The factions receive substantial support from foreign actors, leading many to label the conflict a proxy war waged by both regional and global powers.

More than 4.5 million people have fled Syria since the start of the conflict, most of them women and children.

Neighbouring Lebanon, Jordan and Turkey have struggled to cope with one of the largest refugee exoduses in recent history.

About 10% of Syrian refugees have sought safety in Europe, sowing political divisions as countries argue over sharing the burden.

A further 6.5 million people are internally displaced inside Syria, 1.2 million were driven from their homes in 2015 alone.

The UN says it will need $3.2bn to help the 13.5 million people, including 6 million children, who will require some form of humanitarian assistance inside Syria in 2016. About 70% of the population is without access to adequate drinking water, one in three people are unable to meet their basic food needs, and more than 2 million children are out of school, and four out of five people live in poverty.

The warring parties have compounded the problems by refusing humanitarian agencies access to civilians in need.

Up to 4.5 million people in Syria live in hard-to-reach areas, including nearly 400,000 people in 15 besieged locations who do not have access to life-saving aid.