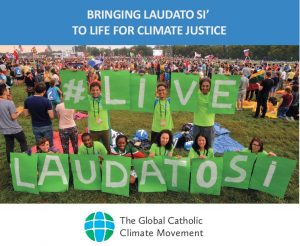 The board of the Global Catholic Climate Movement (GCCM), a network of over 400 organisations and thousands of individual Catholics, visited Ireland in recent days to promote their mission of bringing Pope Francis’ encyclical ‘Laudato Si’ to life in the Church.

The GCCM aim to facilitate an ecological conversion among the Catholic faithful, to help the Catholic family lead by example and dramatically shrink its collective carbon footprint and to promote renewable energy.

On Thursday, the board met in the Columba Centre in St Patrick’s College, Maynooth, with the Laudato Si’ working group of the Irish Council for Catechetics to discuss climate initiatives happening here in Ireland.

The joint meeting between the GCCM and the Laudato Si’ working group of the Irish Council for Catechetics was themed ‘How are we Caring for our Common Home?’

Participants reflected on the message of Laudato Sí and how it is being received in Ireland and internationally, especially in light of the World Meeting of Families in Dublin in August of this year.

The group began their visit this week with a spiritual retreat to Glendalough in Co Wicklow on Monday, where they took part in a guided walk led by Fr Michael Grogan of the Tearmann Spirituality Centre.

Lorna Gold of Trócaire said it was “significant” that the Global Catholic Climate Movement chose to meet in Ireland at the start of 2018.

“This meeting comes a week after a bishops’ retreat in Knock focusing on Laudato Sí. It also comes as the Irish parliament voted to end climate damaging fossil fuel exploration. It will be exciting to see what new initiatives arise. Trócaire, as a partner of GCCM, is delighted to have the chance to welcome the board to Ireland,” she said. 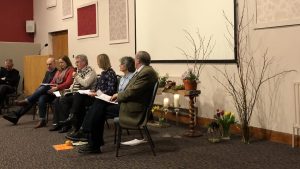 Of that meeting in Knock with the bishops, Fr Sean McDonagh told CatholicIreland.net that he urged the episcopal group to introduce a season of creation in September.

The Columban missionary explained that the bishops had asked him about how he would link the areas of social justice and poverty with the environment.

He urged the bishops to get behind the message on climate change as major fines were on the way for Ireland for having failed to meet its climate targets, which could cost up to €150m a year.

In the final ritual of the day, some seeds were planted in a jar with the hope that they will grow and blossom so that they can be brought as flowers to the World Meeting of Families Mass in Croke Park.