Home > Featured > Catholic majority to continue in US Supreme Court

Catholic majority to continue in US Supreme Court 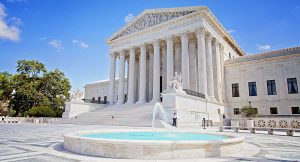 The US Supreme Court buidling in Washington, DC

The US Supreme Court’s distinctly Catholic flavour is set to continue with six of its nine judges having been brought up in the faith.

At present, Judges Anthony Kennedy, Clarence Thomas, John Roberts, Samuel Alito and Sonia Sotomayor are all practising Catholics. Judge Neil Gorsuch was also raised a Catholic, but in recent years he has been attending an Episcopalian (Anglican) church.

Judge Kennedy, who was nominated by President Ronald Reagan, is due to retire shortly and President Donald Trump has nominated Judge Brett Kavanaugh as his replacement.

Judge Kavanaugh is a man of practical faith, who continues to honour his outstanding commitments despite receiving the presidential nomination on Monday. As a result, the judge was doing voluntary duty in a kitchen for the homeless on Wednesday night. Wearing a Diocese of Washington apron, the judge served macaroni cheese to people who otherwise would have gone hungry.

The judge also regularly serves as a minister of the Word at the Shrine of the Most Blessed Sacrament, his parish church in Washington, DC.

The prevalence of Catholics in the judicial branch of America’s federal government is notable given that its executive branch, the office of president, has seen only one Catholic, President John F Kennedy, elected as American head of state in 1960.

At one time there was once open hostility in America to Catholics holding political office. The first Catholic to have been in with a real chance of becoming president was Al Smith who stood as a Democratic candidate in 1928. A campaign organised by some evangelical Protestants put an end to his presidential hopes.

Notably, when JFK was running for office, evangelical church leaders, including Billy Graham, met to discuss ways of sabotaging his election campaign.

Catholics seeking high office in the United States are regularly questioned about alleged divided loyalties between their country and their faith. When Judge Kavanaugh’s nomination was announced, The Washington Post newspaper carried a headline alleging that he would “struggle between canon and constitutional law”.

Judge Kavanaugh’s response was: “My answer to the question is categorically that in everything I have ever done, in every office I have held in my life or that I shall ever do in the future, what shall control me is the oath that I took to support the Constitution and laws of the United States.”