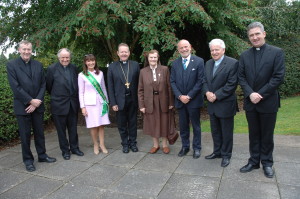 The Catholic Grandparents Association celebrated the tenth anniversary of its founding on Sunday at Knock shrine.
The 2013 pilgrimage saw a host of Irish Catholic bishops participate in a special Mass to mark the occasion.
Capacity crowds filled the basilica for the afternoon of prayer and devotion, with some estimates putting the number as high as 10,000 grandparents, parents and grandchildren.
They joined grandmother and founder, Catherine Wiley, at a Mass which was concelebrated by Coadjutor Archbishop of Armagh, Dr Eamon Martin.
Popular nun, Sr Breege McKenna, gave the keynote address at the Co Mayo basilica. The main celebrant was Fr Fintan Monaghan, Diocesan Secretary of the Archdiocese of Tuam.
Last June, Catherine Wiley, was given unique access to Pope Francis which allowed her to share with him the story of the Catholic Grandparents Association.
Ms Wiley was in Rome to take part in a two-day Year of Faith event for Movements and Lay Associations in the Catholic Church.
Afterwards she said she had brought the Pope “greetings from the grandparents of Ireland and the grandparents of the world”
She added, “I asked St Joachim and St Anne – the Grandparents of Jesus – to bless him all the days of his life.”
“In his homily Pope Francis spoke about grandparents and the great love he had for his own grandmother Rosa, who taught him his faith. In doing so he has empowered and enabled grandparents all over the world. He has also encouraged us in our mission as the Catholic Grandparents Association, which is to help Grandparents to pass on the faith to their grandchildren and to value and support them in this important role.” 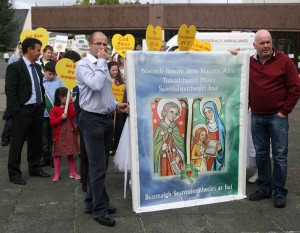 The cornerstone of the CGA is the hosting of pilgrimages to honour and thank St Joachim and St Anne, the Grandparents of Jesus, and all grandparents down through the ages for all they have done in passing on our faith.
There are now CGA pilgrimages all over the World.
For information on the Catholic Grandparents Association: www.catholicgrandparentsassociation.com