Catholic Church in Ireland must move away from ‘service station’ model 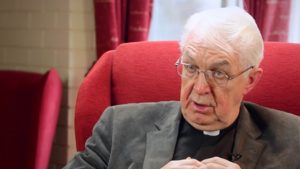 Fifteen years on from the publication of his influential book, The End of Irish Catholicism?, theologian Dr Vincent Twomey has warned that one of the factors contributing to the demoralisation of the clergy in Ireland is the still prevalent pre-Vatican II attitude to the Mass.

In a new paper published in the Jesuit journal, Studies, the professor emeritus of moral theology at St Patrick’s College Maynooth warns that the Sunday obligation has produced “what could be called the ‘service station’ model of church, which, with the declining number of clerics, is putting a huge strain on their time and their limited energy”.

He highlights the assumption “by all concerned” that the Church will provide certain services to the faithful, so that the laity can fulfil their obligations.

“The (remaining, mostly elderly) faithful are satisfied, once they have ‘been to Mass’” and often the attitude is, the shorter the Mass, the better.

As a result, Fr Twomey comments, clergy, conscious of this, are anxious to reduce the ritual to a minimum.

As to the proposals put forward by the Association of Catholic Priests to alleviate the shortage and ageing profile of priests, Dr Twomey warns that these proposals are “predicated on the same traditional model, namely providing the requisite pastoral services to the people, as in a service station. The net result is a desiccated liturgy.”

The Divine Word missionary observes that the main object of Eucharistic ministers is, it seems, to reduce the time needed for distributing Communion.

“Readers read scriptural texts that evidently make no sense to them. Very often, they are indistinct or inaudible. As with the Eucharistic ministers, their presence seems to be a token recognition of lay involvement, in particular by women, with little or no awareness that readers, Eucharistic ministers, choir members (if they exist), and sacristans all need theological training as much as the clergy need ongoing formation and education.”

The net result of all of this, according to Fr Twomey, is that the “source and summit of the Christian life has been reduced to an obligation to be satisfied with the least pain for either priest or people.”

He adds that generally speaking, the state of the liturgy in Ireland is “uninspiring” and says it is no surprise that youth feel bored, if they attend.

Elsewhere in his paper he explains that his book, The End of Irish Catholicism?, sparked considerable discussion, particularly of its radical proposal for a restructuring of the dioceses by reducing them from twenty-six to twelve, or even six.

Though it was debated in the Bishops’ Conference and in Rome, it was rejected by the Irish bishops, who he claims “dissuaded Rome, arguing that, if the diocesan boundaries were now changed, they would in future always be associated with the stigma of the clerical scandals.”

In his paper, as in his book, the former Maynooth professor argues that traditional Irish Catholicism was, for all its extraordinary achievements in education and healthcare, neither fully Catholic nor fully Irish.

His basic thesis is that the fundamental weakness of the Irish Catholic Church has been its anti-intellectual bias and consequent lack of self-criticism.

“It contained within itself the seeds of its present demise. Living among the debris of a distorted cultural expression of Catholicism, the worst expression being the scandals and cover-ups, we are, as the Church, experiencing the end of a cultural phenomenon.”

On the other hand, the greatest achievement of the Irish Church was its missionary tradition, which saw Irish Catholic missionaries leave everything to go to the ends of the earth, first in the seventh to twelfth centuries, and then in the nineteenth and twentieth, “to bring good news to the poor, heal the broken-hearted – and, incidentally, build up societies in every continent through their involvement in education and healthcare.”

But today, missionary vocations have dried up completely, he acknowledges.

The lack of spiritual leaders and the dearth of missionary vocations, according to Dr Twomey, point to the source of the real crisis facing the Church: a crisis of faith.

He adds that though prayer is the way out of a personal crisis of faith, he is not convinced that prayer, however needed, is alone sufficient to overcome the present crisis of faith that has enervated the Church.