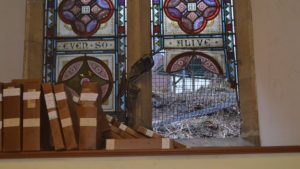 The Catholic Bishop of Derry, Dr Donal McKeown, has said that the Catholic community in Derry City will do all it can to help the Church of Ireland community, after the city’s Protestant Christ Church was vandalised in a sickening attack.

Vandals defecated and urinated in Christ Church during the break-in where extensive damage was caused to the church’s organ. The break-in was discovered late on Tuesday 12th September.  A decanter used for Holy Communion was stolen. It is also believed faeces were smeared on the pages of a psalm book. The vandals also smashed windows, knocked over vases of flowers, removed a bible from a lectern, and flung it into the church’s sanctuary.

The Archdeacon of Derry, Ven. Robert Miller, who is Rector of Christ Church, Culmore, Muff and Saint Peter’s Group of Parishes, told the BBC that the incident had upset the lady who made the discovery and would also cause distress to members of the congregation who worship at Christ Church. “The worst of the damage was inflicted on the church organ,” Archdeacon Miller said. “We believe those responsible broke into the church through one of the stained glass windows, and then smashed a panel behind the organ, where its inner workings are housed. “They climbed in behind the organ and used broken glass – probably from bottles of altar wine which they’d smashed – to cut parts of the mechanism which makes the organ work”.

Dr Donal McKeown, visited Christ Church and conveyed his horror at the incident, as did politicians from the DUP, Sinn Fein and SDLP. The church is just 50 metres from the city’s catholic St Eugene’s Cathedral. When Christ Church was extensively damaged in a sectarian arson attack in 1996, St Eugene’s parishioners rallied to its aid, raising funds to help restore the Church of Ireland place of worship.

Dr McKeown said, “I think we just really feel for the comparatively small Church of Ireland community that worships here, a church where we have been so often for ceremonies, for concerts and for events. I think we have a real sense of solidarity with them.” He added, “We will do what we can to help the Church of Ireland congregation get their beautiful church back to its original state, so that their regular worship of our common Lord can be resumed.”

Sinn Féin Foyle MP Elisha McCallion described the attack as wanton vandalism. She said all places of worship should be treated with respect, adding, “I know this city will rally round and support them in any way we can at this difficult time”. DUP MLA Gary Middleton described it as a “disgusting attack on a place of worship”. SDLP councillor John Boyle said the incident was “repugnant and sickening”.