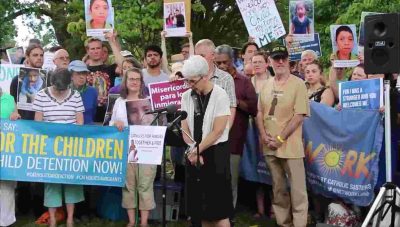 Catholic activists protesting against the US government’s policy of arresting and detaining children (Photo: Columban Center, Washington DC, via Twitter)

Around 70 Catholic priests, brothers and religious sisters were arrested in Washington DC on Friday during an immigration protest.

They were part of a group of about 200 demonstrators who gathered in and around the Capitol Building to protest against the detention of unaccompanied children by American Homeland Security authorities.

The demonstrators carried posters bearing the photos of migrant children who have died while in federal custody. They entered the Russell Senate Office Building and while reciting the Lord’s Prayer a group of them lay on the floor in the shape of a cross.

Claiming to have the backing of the United States Conference of Catholic Bishops, the protest organiser, the Columban Center for Advocacy and Outreach in Washington DC, said: “Catholics have a sacred duty to defend the rights and dignity of all migrants. We must end the injustice happening on our southern border and around the country.”

American bishops have been speaking out against United States Government policies that have led to families being separated and to children being isolated in custody and kept in cages.

Bishop John Stowe of Lexington, Kentucky said: “There has been one chapter after another of serious atrocities intentionally perpetrated on some of the most vulnerable people: family separation, loss of children in custody, two dozen deaths in Immigration and Customs Enforcement custody since 2017, children in cages, living under bridges in extreme temperatures, shielded from public view, assaulted and brutalised, underfed and without facilities for bathing or hygiene.”

Bishop Stowe said American immigration officials appear to be deliberately targeting families, some of whom have come to the United States in a bid to escape gang violence, drug trafficking and economic desperation. He said: “Cruelty toward the suffering and bullying the most vulnerable should not be national policy and we cannot allow it to continue.”

This was the second occasion in recent months where Catholic religious organised a protest in the United States capital about the plight of refugees, migrants and asylum seekers. It appears to indicate a growing radicalisation among American Catholics who are unhappy with American immigration policy.