Home > Featured > Cathedral organist retires after 27 years at the helm

Cathedral organist retires after 27 years at the helm 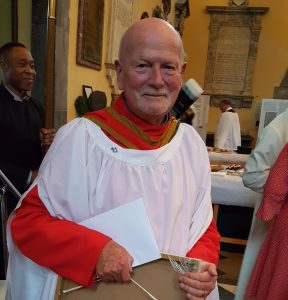 Tributes have been paid to one of the country’s foremost church organists who retired from his role at Christ Church Cathedral in Waterford on Saturday after 27 years.

The ordination ceremony of Rev Trevor Sargent was Eric Sweeney’s 1,405th service as director of music at the Cathedral.

Following the service, the Dean of Waterford Cathedral, Dr Maria Jansson thanked the musician, who is also a composer, for his years of dedicated service as organist and choirmaster.

Speaking to CatholicIreland.net, Dr Jansson said Cathedral staff and parishioners had been “deeply enriched by Eric’s ministry of music”.

“He has both skill, profound faith, modesty and commitment. To say that he is loved is an understatement. He is one of the top organists in the country,” she said.

Speaking about Mr Sweeney’s particular gifts, the Dean said that while there are many great musicians, great organists and great choirmasters, Eric Sweeney was also “a man of deep faith – music is his language with God”.

She added, “He has created a choir for whom singing is their prayer and that is quite different from a performance. There may be other choirs that have amazing voices and amazing tonality and amazing professionalism, but he has managed to draw forth that family in the chancel that worships through song.”

Dr Jansson also explained that Mr Sweeney had managed to create a choir that can function without being directed. “It is quite unusual for a church choir to sing without direction – he has achieved that. Normally speaking, Eric is in the organ loft and the choir are singing by just listening to the music, whereas most choirs are directed.”

The Cathedral is in the process of looking for and appointing a successor to Mr Sweeney. But Dr Jansson highlighted that this would be no easy feat. “To say that he is held in affection is an understatement – he has been at every wedding, funeral, Christmas and Easter service.”

Members of the Waterford Cathedral Choir hail from as far afield as Hungary, Spain, France, Germany, Ukraine, United States and Britain, as well as Ireland.

“It is a multinational choir, and all of them have been drawn to sing as a means of worship,” she said.

While Mr Sweeney will no longer be musical director, the Dean of Christ Church said he would still have access to the cathedral.

“This is the most important organ outside Dublin – you don’t leave a man of his standing without access to it. He has done a recent recording of his compositions here, and there will be events at which he will be the organist or recitalist, as opposed to choirmaster and church organist.”

She added, “But we will miss him because he is a lovely man.”

Speaking to CatholicIreland.net, Mr Sweeney said, “I think music is a ministry in the church, it is impossible for me to separate music from faith – no matter how unorthodox that faith might be.”

He described his work as music director as “a great privilege” and explained that though 27 years seemed a long time, his predecessor Eric deCoursey had served for 47 years. “Between us we have clocked up 74 years.”

He also paid tribute to the “marvellous” choir, whose members weren’t just choristers to him but had become personal friends. “I have been very privileged to know them. They have been very supportive and very long-suffering with some of the music I expected them to sing!”

Eric Sweeney explained that one of the reasons he is retiring is so that he will have more time to devote to composing.

“I am increasingly busy as a composer and I have various projects underway. Just last weekend I recorded a CD of my organ music here in the Cathedral and that will be issued in October at the Imagine Arts Festival in Waterford.”

The album is called The Bright Seraphim which is the title of two of the pieces on the album. It is produced by the label Beaumaris Recordings.

The Bright Seraphim will be launched in Christ Church Cathedral in October with a short recital by Mr Sweeney of pieces from the album.