Fewer cases of Ebola as new vaccine to be tried 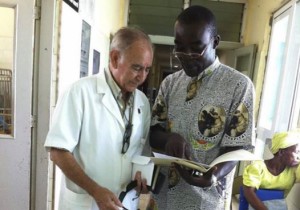 GOAL yesterday (27 July) spoke of how it is to ‘trial’ a new vaccine to combat Ebola in Sierra Leone.

The disease killed almost 4,000 people in that country and the vaccine trial which is being co-ordinate between GOAL, Johnston & Johnston and the London School of Hygiene and Tropical Medicine may provide a way to finally halt the disease.

Barry Andrews, CEO of GOAL, stated on Radio 1 News that his organisation was approached by the other partners because of its “extensive” network of contacts with community and religious groups that GOAL mobilised to fight Ebola, and because the charity runs one of the largest treatment centres Sierra Leone.

He said that “happily” they are in a position where there are fewer cases of Ebola.

So instead of being much more extensive project, the first stage of the trial will involve 40 participants, the second 400 and the final 6,000.

“We hope it will begin at the end of next month, most people agree that getting to zero cases of Ebola in Sierra Leone will depend on a breakthrough in a vaccine.”

He said that the country‘s health service is still under tremendous pressure.

There are only 129 doctors in the whole of Sierra Leone which has a population of 6 million.

In the last week of June 2015, some 20 new cases of Ebola were confirmed in Guinea and Sierra Leone.

Unfortunately, Liberia confirmed a second case of Ebola seven weeks after being declared Ebola-free in May – a crushing blow to a country already devastated by this epidemic.

This is according to Edmund Rice Development in its latest update on the disease.

Speaking about schools which closed in an attempt to curb the spread of the virus, the charity reported that during April 2015, schools re-opened across West Africa. This was a very important step in the recovery process.

“Our school has re-opened, and Ebola precautions are being implemented for pupils and teachers,” said Br Abu Steven Kargbo, who teaches at Njala University Secondary School.

Precautions include testing pupils’ temperatures and the use of buckets of chlorinated water (for its disinfectant properties) to ensure as safe a learning environment as possible.

The situation is, however, still critical in small towns and villages. In many of these, schools have no furniture or basic school material.

According to the Ministry of Education, all schools should have been supplied with basic school materials before the reopening, but in reality this has not been the case.

In Baoma Chiefdom, Sierra Leone, only 21 out of 56 schools received such support, while teachers of 35 schools were unable to teach due to lack of teaching and learning materials.

Over the past months, Christian Brothers and Edmund Rice staff focused relief and recovery efforts on supporting families and orphaned children.

This has been done through the provision of food, hygiene materials and counselling support, and also ensuring as many children as possible return to education.

These efforts have been recognised by the Ministry of Social Welfare, Gender and Children’s Affairs and the District Ebola Response Committee in Sierra Leone, who recently awarded the Christian Brothers two separate certificates of recognition for their contribution, support, commitment and relentless service in the fight against Ebola.

These response activities and more have been possible thanks to the generosity of donors who to date have contributed over €110,000 to this Ebola Relief and Recovery Appeal since September 2014.