Carmelite prior installed as an ecumenical canon by CofI cathedral 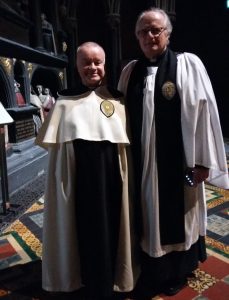 The Prior of the Carmelite order in Ireland has described his installation as an ecumenical canon of St Patrick’s Cathedral Dublin as a “tremendous honour”.

Fr Brian McKay was speaking after Choral Evensong at the Church of Ireland cathedral on Sunday.

He is the third Roman Catholic to be installed as an ecumenical canon since 2007, when a bill was passed by the general synod allowing St Patrick’s appoint two ecumenical canons in addition to 26 other canons.

Fr McKay follows in the footsteps of Professor Enda McDonagh, who was appointed as the very first Roman Catholic ecumenical canon in 2007.

“I was elected to succeed Kieron O’Mahony on 6 November and I will be in the role for five years,” Fr McKay explained. He is now referred to as Canon McKay in St Patrick’s Cathedral and he also has a Carmelite habit bearing a canon’s seal in the Cathedral’s robing room.

Speaking to Catholicireland.net after the ceremony, Canon Charles Mullen, who preached the sermon and is Prebendary of Rathmichael parish, said it was “a great privilege to have Fr Brian McKay, long time and well-known Carmelite in Dublin, installed as a canon of St Patrick’s Cathedral.”

Explaining what the role entails, Canon Mullen said the role of cathedral clergy mainly relates to services and offices.

Ecumenical canons, he said, are “fully canons” and can vote and “get to do exactly the same things as the Church of Ireland canons”. He added, “We make absolutely no distinction.”

In his sermon, Canon Mullen noted how Canon McKay’s connections with St Patrick’s Cathedral date from the late 1970s when he studied organ under John Dexter.

The Carmelite was a musician at St Mary’s Pro-Cathedral and as a tribute to that, the Palestrina Choir joined St Patrick’s Cathedral Choir for Evensong on Sunday.

Elsewhere in his sermon, Canon Mullen underlined, “We’re not trying to minimise or ignore the difficulties that arise from the differences between us. Differences can, after all, encourage us to learn from one another.”

He highlighted how he had been a lunch guest of the Carmelite community in Whitefriar Street most Thursdays since 2002, and said they “never treated me as an outsider, but as a neighbour who, like them, lives out the joys and sorrows of ministry. 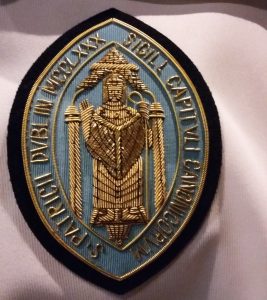 “We share our news (good and bad), our observations (joyful, but sometimes despairing), of developments in our respective churches; and our stories.”

The Church of Ireland clergyman said these stories challenge, “but often they reassure and amuse us: the things on which we differ help us find strength from the things we share. We try to approach our differences with honesty and courtesy: none of us has ever felt a need to ‘convert’ one another.”

Elsewhere, he said ecumenism serves to “deepen our respect for one another. If we tried to make our ecumenical canons Anglican they’d no longer be ecumenical and we’d all lose out. So if Canon McKay becomes an Anglican as a result of being elected to Chapter, my Carmelite friends and I will be demanding our money back …!

“Ireland is full of communities coming together to protest about local controversies, for example the closure of hospitals. The churches also come together to commemorate significant anniversaries of historical events.

“These things we can, and should, be doing together. The things we have to do apart must never fool us into thinking that we should do everything apart.

“We fall into great danger in being tempted to do things apart when we could be doing them together.”

At the end of the ceremony on Sunday, members of the Cathedral Chapter processed to St Stephen’s Chapel, where Canon McKay was granted a place and voice in Chapter.

Afterwards, Canon Mullen told Catholicireland.net that as neighbours, members of the Friends of St Patrick’s Cathedral had been to visit Whitefriar Street church and the Carmelite community, with whom he gets on “enormously well”.

“I don’t feel like a visitor, I just feel like one of them. The Carmelites come here and we make no distinction really. Actually we are all struggling together and when you are struggling and you struggle with other people, the struggle is less of a struggle.”

He added that when he looked down from the pulpit during his sermon, “I didn’t see Catholics or Protestants, I saw people looking for answers and looking for a little bit of reassurance. Here we have it – they reassure us and we, I hope, reassure them. We are all in it together.”

Fr Brian McKay told CatholicIreland.net he had associations with St Patrick’s and with the people associated with it for probably 40 years or more.

“Curiously enough, on my own faith journey and my journey through ordination and even the years after that, the members of this community have actually been a pillar of my life.

“So, this is not something that has happened out of the blue. They have honoured me by electing me a member of their cathedral chapter in recognition of those years of journeying together. It is a huge personal honour and it is an honour for the Carmelite order in Ireland.”