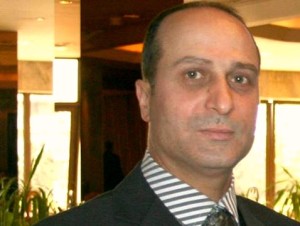 Caritas is mourning the death of one of its workers, Safouh Al-Mosleh, who was killed when a shell fell on his house in the city of Aleppo in Syria.

Deepest sympathy and prayers were sent to Safouh Al-Mosleh’s parents, brother and sisters, “and to his colleagues in Caritas Syria and to the team in Aleppo, who achieve so much in such difficult circumstances,” said Michel Roy, Secretary General, Caritas Internationalis.

“Sadly, this tragedy will not be the last heartbreak in Syria.”

Safouh Al-Mosleh’s home is in an area which has been heavily shelled of late, with its three Christian cathedrals – Greek Catholic, Armenian and Maronite.

The family of Safouh Al-Mosleh had evacuated but he went back and was there when a mortar struck. He was in his forties, and began working with Caritas about a year ago.

He was a member of the Greek Catholic Church and community.

As one of very few independent agencies left in the country, Caritas Syria provides food, shelter and other help to poor and vulnerable people. In Aleppo, Caritas Syria helped 1,600 elderly people in 2014 in Aleppo.

Caritas Syria says that the situation in the north is getting worse every day. Caritas staff have stated: “Aleppo has been cut off for 16 days, with no telecommunications, Internet or electricity. In the last four days, the situation is even worse with the escalation of mortar shells hitting the city every day.” 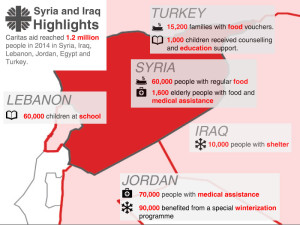 Just a month ago Caritas stated its aim to increase its work in Syria, Iraq and across the Middle East in 2015 as the conflict in Syria enters into its fifth year.

Trócaire in Ireland is one such partner.

Caritas Syria President Bishop Antoine Audo of Aleppo said last year was the “hardest of all”. The situation was expected to deteriorate further in 2015.

“Half of Syria’s inhabitants are either internally displaced or are refugees. Eighty percent of the workforce doesn’t work. The rich have left, the middle class has become poor and the poor have become destitute,” said Bishop Audo.

The fighting has left 12.2 million Syrians in need of help, 7.6 million forced to flee their homes inside the country and 3.8 million who fled across borders to neighbouring countries as refugees.

Funding shortages means aid-dependent Syrians are already facing cuts. Caritas Internationalis called on the international community to provide more funding so agencies can meet the basic needs of affected people inside the country and in neighbouring countries.

Details of Trócaire’s ongoing Syria appeal are available on its website.