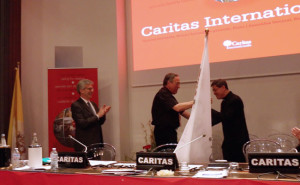 Oscar Romero was adopted as a patron of Caritas Internationalis at the charity’s General Assembly last weekend.

Archbishop Romero of San Salvador, who was murdered for his solidarity with the poor in El Salvador, will be *beatified next Saturday (23 May) in San Salvador.

The General Assembly of Caritas, which ended on Sunday 17 May, was attended by more than 400 representatives of 160 national Caritas organisations (in Ireland Caritas is Trócaire).

The newly-elected president, Cardinal Luis Antonio Tagle of Manila said, “With the launch of the Sustainable Development Goals (SDGs), Pope Francis’ encyclical on ecology, and the UN climate meeting in Paris this year, Caritas will work towards putting the human family and human dignity at the heart of development.”

Cardinal Tagle is the first Caritas Internationalis President to be elected from Asia.

“Thank you for your trust. I’m limited in my capacities but with all of you, with the love that Jesus has poured into our hearts and in the name of all of the poor people in the world, I accept this election,” he said.

“Let us together strengthen the church of the poor so our witness can help guide us to a world of understanding justice, true freedom and peace.”

As well as electing a new president, the assembly reconfirmed Michel Roy as Secretary General and Alexander Bodmann of Austria was elected as the new treasurer.

Caritas delegates highlighted the plight of Christians who suffer from religious persecution in Syria and Iraq and of migrants and refugees all over the world.

“We urge governments to build safe havens and humanitarian corridors, rather than fences, walls or programmes of interdiction at sea,” Caritas said. 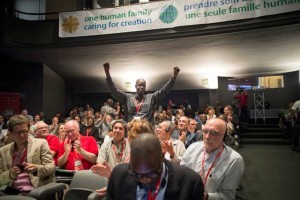 South Sudan was accepted as the 165th national member organisation of the Caritas confederation.

He explained that food  shortages came about due to conflict.

“Most people were unable to cultivate their crops because they were in the United Nations camps for internally displaced people and did not travel back to their farms when it was time to plant. There are other problems that make the situation worse – there is inflation in the country, a lack of fuel and the prices of commodities are going up as well. Life is very difficult, particularly for the most vulnerable.”

Caritas Internationalis’ General Assembly closed with member organisations agreeing to adopt a vision of ‘One Human Family, Caring for Creation’.

The final message of the Assembly stated that in relation to the Sustainable Development Goals (SDGs) “no target should be considered as met unless achieved for all income and social groups; this fundamental, person-centred strategy must be central”.

The message urges governments to look beyond their own borders and to recognise the moral imperative that is inherent in the care for creation.

Archbishop Oscar Romero was one of the 75,000 people who were killed in El Salvador’s civil war from 1980 to 1992. No one was ever prosecuted for his assassination. Next weekend, he will be beatified in San Salvador.

Archbishop Diarmuid Martin of Dublin will mark the beatification at the Festival of Peoples Mass in St Mary’s Pro Cathedral at 6.30pm on Sunday 23 May. President Michael D. Higgins will attend.

The Mass will also celebrate the thousands of people who have come to live in Dublin city and county in recent years from all over the globe.

Irish and world music will be incorporated into the liturgy while representatives of many ethnic groups will attend in traditional dress (see http://www.dublindiocese.ie)

Separately, a film about the life of Oscar Romero will be shown followed by a short discussion on the consequences of his life and beatification for the global church on Thursday 28 May 2015 from 2pm – 4.30pm in CORI, St Mary’s, Bloomfield Ave, Dublin.