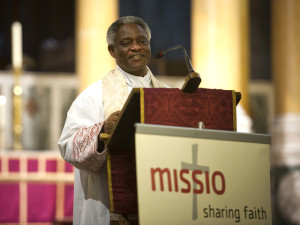 Cardinal Peter Turkson, President of the Pontifical Council for Justice and Peace at the lectern in Westminster Cathedral. Pic courtesy: www.catholic-ew.org.uk

The President of the Vatican’s Pontifical Council for Justice and Peace, Cardinal Peter Turkson, has paid tribute to St Columbanus saying the Irish Saint sowed seeds of the “great peace project we know today as the European Union”.

Giving the annual St Brigid’s lecture in Belfast on the theme: ‘Pope Francis and the Joy of the Gospel: The Social Dimension’, Cardinal Turkson noted that Christians in Bobbio, Ireland and across Europe will this year commemorate the 1400th anniversary of the Saint’s death.

He described St Columbanus as a messenger “who was fired up with the joy of the Gospel, eager to bring the beauty and peace of the Gospel to far-off lands”.

Recalling how St Columbanus and his monastic companions left Bangor on the shores of Belfast Lough, the Cardinal referred to the monk’s fifth letter to Pope Boniface, in which he said St Columbanus “anticipates the sentiments of Pope Francis”.

“He places the work of peace, first and foremost, in the encounter with Christ who takes us beyond our self-centredness to the peaceful encounter with the other, in the tenderness and joy of the Gospel.”

Concluding his address, Cardinal Turkson, who was considered one of the contenders for the papacy in the wake of Benedict XVI’s resignation, said he was conscious that he had come to a country which since the time of St Patrick, has given much to the rest of the world in terms of “proclaiming the Gospel in a missionary tone”.

“May God bless you for that living flame of missionary faith which so ignited the hearts of Christians here in Ireland. Please count on the solidarity and support of the Pontifical Council for Justice and Peace as you work and pray for a renewal of evangelical zeal in every Christian heart,” he commented.

He also encouraged the Irish faithful to return again and again to Evangelii Gaudium as “a deep reservoir of wisdom and light offered by Pope Francis”.

He added, “It reminds us that the words of Gospel are ever fresh and ever new. It reminds us of the blessing of peacemakers.”

This was the President of the Pontifical Council for Justice and Peace’s first visit to Belfast.

“For many years, images of violent conflict have flashed across the world from this divided city. Today, it is a great joy to witness at first hand the enormous efforts being made in the search for reconciliation and peace among the people of this city and between the islands of Great Britain and Ireland,” he said.

He added that he realised the people of Northern Ireland continue to face many challenges.

“The journey to peace rarely travels along a fast road. It is more likely to meander down narrow paths and double back over difficult terrain. It much requires God’s help.”

The Ghanaian prelate explained that he had some personal experience in such matters as he had presided over the National Peace Council of Ghana from 2006-2010 and brokered pre- and post-electoral peace processes.

“As a society, through the combined efforts of many in public, civic and ecclesiastical life, you have managed to keep moving towards peaceful co-existence and political stability,” he paid tribute and added that he welcomed the opportunity to express the continued solidarity and prayerful support of the Holy See in your efforts to build, upon the agreements already achieved, a truly reconciled and therefore peaceful future for all.

In his address, Cardinal Turkson explored some key themes in the pontificate of Pope Francis.

He told those gathered in St Brigid’s for his address on Wednesday that a defining motif of the pastoral ministry of Pope Francis is what he calls in Evangelii Gaudium, “the growth of a peaceful and multifaceted culture of encounter”.

This “culture of encounter”, just like the “call to the peripheries”, is not an academic abstraction. It is an essential and intrinsic part of the proclamation of the joy of the Gospel, he commented.

“We have seen this at work in his bringing together of Israeli and Palestinian leaders for a joint service of prayer for peace and mutual understanding in the Vatican.”

“We observed it in the moving and powerful vigil of prayer for peace and an end to the use of chemical weapons in Syria.”

“We have witnessed it in the quiet but effective diplomacy he has exercised in bringing new understanding between the Governments of Cuba and the United States.”

“Perhaps most importantly of all, we have witnessed it in his daily outreach to those he sees in the crowds, those he meets in Casa Santa Marta, those he meets, writes to, or phones ‘out of the blue’.”

“We witnessed it in his decision to visit a prison for his first Holy Thursday where, among others, he washed the feet of a Muslim woman.”

According to Cardinal Turkson, all of these actions reveal a central conviction of Pope Francis, reinforced throughout Evangelii Gaudium, that “Evangelisation also involves the path of dialogue” and that “By preaching Jesus Christ, who is himself peace, the new evangelisation calls on every baptised person to be a peacemaker and a credible witness to a reconciled life.”

He said that he was very struck by the fact that when St John Paul II visited Ireland in 1979, he spoke of those “called to the noble vocation of politics”.

He explained that it is a theme which the Pontifical Council for Justice and Peace is studying with a view to articulating the vocation of the political leader: how to give greater support and guidance to those Catholics who are called to witness to the joy and transforming power of the Gospel as elected representatives or public servants.

“It would certainly challenge the view that a Catholic politician can somehow publicly or privately disregard the teaching of the Church while still claiming to be a committed and informed member of the Church.”

The Cardinal suggested that the common good is best served when politicians and the structures of government find ways of developing effective partnership and collaboration between all the sources of social, economic and bonding capital in a society.

This is especially true when a society is trying to rebuild its social cohesion after a period of violent conflict.

“In this regard I note the calls that have been made by Bishop Treanor and other Church leaders for a wider culture of civic dialogue and engagement to be developed as an intrinsic part of securing peace and building reconciliation. Churches, community groups, business leaders and entrepreneurs all have vital sources of experience, wisdom and influence that can assist and contribute to the political effort to build a cohesive and reconciled society.”

Now “new forms” of poverty and vulnerability are emerging along with persistent ones; it is essential that the Church reach out to new and old forms of vulnerability.

Cardinal Turkson admitted that he was “shocked” to learn that Northern Ireland has some of the highest levels of childhood poverty in the whole of Europe.

“Addressing the needs of migrants, addressing the high levels of childhood poverty, these are concrete and essential ways by which we can give practical witness to the joy of the Gospel and to its transforming, healing power,” he said.