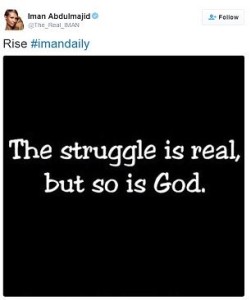 The president of the Vatican’s Pontifical Council for Culture paid tribute to David Bowie on Monday following news of the music legend’s death.

Cardinal Gianfranco Ravasi took to Twitter and quoted lyrics from one of Bowie’s most recognised songs, ‘Space Oddity’.

The Vatican’s culture minister tweeted the opening lyrics “Ground Control to Major Tom/Commencing countdown, engines on/ Check ignition/and may God’s love be with you.”

Separately, the often culturally conservative L’Osservatore Romano also paid tribute to the rock legend, describing Bowie as a singular musician, who was “never banal” and grew artistically over five decades thanks to his interest in art, film and theatre.

However, it also referenced the more experimental dimension of some of Bowie’s personas referring to the “ambiguous image” he cultivated early on in his career and blaming it on his aim to attract media attention.

While David Bowie’s supermodel wife Iman has so far refrained from publicly commenting on the death of her husband, she posted a seemingly faith-inspired comment on Twitter. It simply stated, ‘The struggle is real but so is God.’

On 9 January, the day after David Bowie’s 69th birthday she tweeted, ‘Sometimes you will never know the true value of a moment until it becomes a memory.’

Just three days after the release of his final album, ‘Blackstar’ on his birthday, the legendary singer-songwriter died on Sunday after a battle with cancer.

A statement on Bowie’s Facebook page said, “David Bowie died peacefully today surrounded by his family after a courageous 18-month battle with cancer. While many of you will share in this loss, we ask that you respect the family’s privacy during their time of grief.”

Bowie and Imam married in April 1992 in a private ceremony in Lausanne, and the wedding was later solemnised in June in Florence, Italy.

They had a daughter, 15-year-old Alexandria Zahra Jones, together and Imam also acted as stepmother to Bowie’s son Duncan Jones – whose mother is the musician’s first wife Angie Bowie.

Blackstar was Bowie’s 25th album and his longtime producer Tony Visconti called it his “parting gift”.

The lyrics of the song ‘Lazarus’ on the new album appears to be a Bowie’s swansong to the world in which he imagines himself in Heaven.

Look up here, I’m in heaven
I’ve got scars that can’t be seen
I’ve got drama, can’t be stolen
Everybody knows me now

Look up here, man, I’m in danger
I’ve got nothing left to lose

During his 40-year career, Bowie, who experimented with Christianity and appears to have held on to parts of the experience, excelled at glam rock, art rock, soul, hard rock, dance pop, punk and electronica.

In a 2004 interview, Bowie told Ellen DeGeneres that he experimented with a number of religions including Christianity before finding his place as a singer.

“I was young, fancy free and Tibetan Buddhism appealed to me at that time. I thought, ‘There’s salvation.’ It didn’t really work. Then I went through Nietzsche, Satanism, Christianity… pottery, and ended up singing. It’s been a long road,” he said.

His 1976 song ‘Station to Station’ is considered his most explicitly religious work and is said to have been written when he turned to Christianity during his cocaine-fuelled days.

“The ‘Station to Station’ track itself is very much concerned with the stations of the cross. … I’ve never read a review that really sussed it. It’s an extremely dark album. Miserable time to live through, I must say,” Bowie told Q Magazine in a 1997 interview.

In 2003, Bowie told Beliefnet, “I honestly believe that my initial questions haven’t changed at all. There are far fewer of them these days, but they’re really important. Questioning my spiritual life has always been germane to what I was writing. Always. It’s because I’m not quite an atheist and it worries me. There’s that little bit that holds on: Well, I’m almost an atheist. Give me a couple of months …”