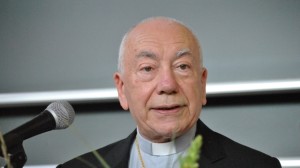 The Vatican’s top canon lawyer chosen by Pope Francis to oversee a reform of the process of annulments signalled that he wants to see major change in the way that failed marriages are declared null.

Italian Cardinal Francesco Coccopalmiero is president of the Vatican’s Pontifical Council for Legislative Texts and a member of the commission Francis set up last month to study reforming the annulment procedure.

He told journalists reporting on the Vatican’s Synod for the Family on Thursday that he favours letting individual bishops make nullity decisions after careful consideration based largely on the credibility of the couple, changing what has been an exclusively judicial process to an administrative one.

He said care would be needed to ensure this procedure did not become superficial, but he said he was “very much in favour” of this approach.

He also said removing an automatic appeal for all annulment cases, or reducing the number of judges from three to one on the tribunal, could also help.

The cardinal said he had expressed these views at the synod. He related a hypothetical situation of a woman who had been abandoned by her husband, and who later was married civilly to a man with whom she raised a family and shared a life together.

He said that in these types of situations, priests could not simply cite rules – they have to do something. “If the synod is thinking along those lines, it’s already a big result,” he said.

Coccopalmiero said the practice of the Orthodox Church, whereby second and even third marriages could be accepted by the Church, deserved study, but did not believe the Catholic Church should implement such a model.

The issue has been centre stage in the first week of the synod as senior bishops have debated whether there should be any reform of the ban on remarried Catholics receiving Communion.

One solution put forward has been to streamline the often lengthy annulment process, therefore enabling more divorcees to have their second marriage recognised by the Church.

On Friday the Italian press reported that another cardinal, Dionigi Tettamanzi, Archbishop Emeritus of Milan, said he was in favour of Cardinal Kasper’s proposals with three conditions.

“If you take the sacraments as the signs of mercy of God, if you avoid confusion on the indissolubility of marriage and if you guarantee renewed efforts towards christian life and paths of faith which are true and serious.”

“It’s worth clarifying that the divorced remarried are members of the Church by virtue of their baptism.”

“God loves all, bar none, with a merciful heart,” he said.

Meanwhile, Cardinal Gerhard Müller, prefect of the Congregation for the Doctrine of the Faith, told one of the two Catholic TV broadcasters allowed inside the synod hall that the speeches should be made public.

“All Christians have the right to be informed about the intervention of their bishops,” he said.