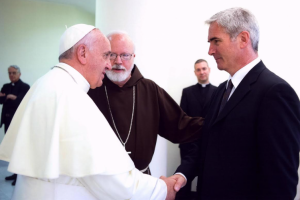 Cardinal Sean O’Malley of Boston has been reappointed president of the Pontifical Commission for the Protection of Minors, the Vatican confirmed on Saturday.

The membership of the Commission lapsed last December after completing its three-year term.

Earlier in the year, the two survivors of clerical abuse on the Commission’s membership, Marie Collins and Peter Saunders, resigned from the advisory body in protest over curial resistance to the PCPM’s work.

On Saturday, Pope Francis announced that nine new members had been appointed to the Commission, and seven of the previous members reappointed including Jesuit, Fr Hans Zollner and Mgr Robert Oliver from Boston who returns as the Commission’s secretary.

Speaking to the National Catholic Reporter, Marie Collins expressed regret over the Commission’s loss of members with so much experience. Three of those not reappointed were leaders of the PCPM’s six working groups.

“I’m shocked at the discarding of some of the most active and independent members of the commission. Some of those who have gone were really the most active and had the most experience of working in child protection and working directly with survivors,” Collins told NCR.

The eight new members of the abuse commission are:

In a statement on Saturday, Cardinal O’Malley said the new appointees would add to its global perspective in the protection of minors and vulnerable adults.

“The Holy Father has ensured continuity in the work of our Commission, which is to assist local churches throughout the world in their efforts to safeguard all children, young people, and vulnerable adults from harm.”

The Commission’s press release noted that the eight men and eight women who form the membership of the new Commission were chosen “from a multi-disciplinary field of international experts in safeguarding children and vulnerable adults from the crime of sexual abuse.”

According to the press release, several members of the Commission are themselves victims of clerical sexual abuse. It is unclear who they are.

When the Pontifical Commission for the Protection of Minors was set up in 2014, it was mandated with bringing forward proposals for best practice on protecting minors and vulnerable adults from sexual abuse and promoting educational programmes to help local churches safeguard children, young people, and vulnerable adults.