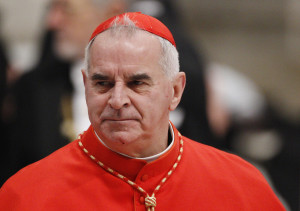 An offer by the disgraced former leader of the Scottish Catholic Church, Cardinal Keith O’Brien, to resign from the rights and privileges of being a cardinal has been accepted by Pope Francis.

Cardinal O’Brien stood down in February 2013 after three priests and a former priest revealed in the Observer newspaper that he had made inappropriate sexual advances to them when they were training to be priests in the 1980s.

The cardinal will be allowed to retain the use of his title but will not be permitted to participate in a future conclave and will not exercise any of the privileges associated with the office.

A statement for the Catholic Church in Scotland confirmed that Cardinal O’Brien would continue to live outside Scotland until such time as his age and infirmity required that situation to be reviewed.

Responding to the announcement, Cardinal O’Brien apologised to those he had “offended in any way”.

He confirmed that he would “continue to play no part in the public life of the Church in Scotland”.

The 77-year-old currently lives in Northumberland in the north of England not Scotland.

Reiterating his apology of March 2013, Cardinal O’Brien said he would “dedicate the rest of my life in retirement, praying especially for the Archdiocese of Saint Andrews and Edinburgh, for Scotland, and for those I have offended in any way”.

Archbishop Leo Cushley, who has succeeded Cardinal O’Brien in Edinburgh, acknowledged that Cardinal O’Brien’s behaviour had “distressed many” and “demoralised faithful Catholics and made the Church less credible to those who are not Catholic”.

“I therefore acknowledge and welcome his apology to those affected by his behaviour and also to the people of Scotland, especially the Catholic community,” he said.

Cardinal O’Brien was born at Ballycastle Co Antrim on 17 March 1938. After primary education in Ballycastle, he moved with his family to Scotland where his father was serving with the Royal Navy.