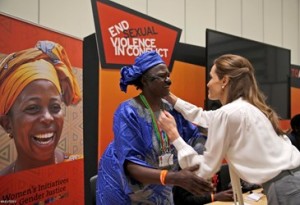 “There is no place in sexual relations for brutality, aggression or any kind of de-humanisation of a person,” Cardinal Vincent Nichols of Westminister has warned.

In his address at the Global Summit to End Sexual Violence in Conflict, the Cardinal said that “A fundamental aspect of the Church’s teaching about sex is that sexual acts must always take place within the context of authentic freedom.”

Speaking out forcefully against rape, he warned that “Every human activity is subject to moral principles and judgment if it is not to lose its truly human character and sink into the realms of the amoral, the dark hole of a subhuman wilderness.”

Quoting the Church’s teaching in the Catechism on immoral acts in war, he said “this principle applies to situations of warfare and conflict.”

“The violation of that bodily integrity in sexual violence is therefore a most fundamental denial of human dignity and a most gross breach of a person’s human rights. It is a crime which ought to be eradicated with all vigor,” the leader of the Church in England and Wales said.

Elsewhere in his address, he explained that the dignity of every person arises from within their nature and that nature is most clearly understood as deriving from its Creator, from the mystery of God.

“Here the light of faith sharpens our rational understanding, it deepens our sense of who we are and the dignity which is properly ours. And in this God-given dignity, the right to life itself and the right to bodily integrity are fundamental, as is the right to religious freedom.”

It was co-hosted by the British Foreign Secretary William Hague and UN Special envoy and actress, Angelina Jolie, who called on governments around the world to support the changes outlined in the protocol.

In his speech, Cardinal Nichols, deplored the frequent de facto cultural acceptance of sexual violence in many situations and stressed that war is never an excuse for such crimes.

Interviewed by Vatican Radio, Cardinal Nichols said the conference was very necessary because there is a real need to end the climate of impunity for these “awful crimes.”

The Cardinal described the prevalence of sexual violence in wars and conflicts as “indescribably terrifying” and warned that this kind of sexual violence was “often done to order” and amounted to the “systematic brutalisation” of people.

“It’s a direct attack on the very essence of a human being,” he told Vatican Radio.

Full text of the address by  Cardinal Vincent Nichols, Archbishop of Westminster, to the conference, delivered on 12th June 2014:

“I am privileged to have this opportunity to speak at this most important Initiative and to be invited to do so from the perspective of my Catholic Faith. In doing so, I offer my fullest congratulations to the Foreign Secretary in particular, for his dedication to this crucial cause.

The unbelievable surge of sexual violence against both women and men in parts of our world is manifested in the shocking facts well documented in this Conference. I doubt though whether even the most graphic accounts of this evil are capable of conveying the sheer horrors which are generated by sexual violence in conflict and warfare.

The damage which is done to the human dignity of the large numbers of victims of sexual violence is so radical and so permanent that it defies description.

It is not the random act of men who have, for a while, lost all sense of decency, which defies description but the deliberate and ordered tactic of oppression, domination and destruction which is at the noxious heart of sexual violence.

It is to the shame of our world that the systematic use of sexual violation is still today, in some places, considered as a duty of soldiers, an order that they must carry out. This horror is further compounded by the fact that the stigma attached to sexual violation often falls on the victim and not on the perpetrator. What terrible collusion is indicated by that fact!

The public tolerance of sexual violence leads to the inversion of human decency; it reinforces other forms of oppression and undermines the morals which uphold the rights of the human person.

I wish to make three points regarding the moral and religious framework which, I believe, can strengthen this fight against Sexual Violence in Conflict.

The first is the clear principle that every human activity is subject to moral principles and judgment if it is not to lose its truly human character and sink into the realms of the amoral, the dark hole of a subhuman wilderness.

This principle applies to situations of warfare and conflict. No declaration of war – whether arguably legitimate or not – excuses those who fight from their obligation to observe fundamental moral principles.

In Catholic teaching this is described as ‘jus in bello’, that just principles must be observed even in warfare. The teaching states: ‘the Church and human reason both assert the permanent validity of the moral law in armed conflict.

The fact that war has regrettably broken out does not mean that everything becomes licit between the warring parties (CCC 2312). It refers explicitly to ‘non-combatants, wounded soldiers, prisoners’ who must be respected and treated humanely.’

It continues ‘Actions contrary to the law of nations and to its universal principles are crimes, as are the orders that command such actions. Blind obedience does not suffice to excuse those who carry them out’ (2313).

History has many examples of the pursuit of war criminals. It is also has many instances of the failure to do so. In this Initiative, the measures being proposed and pursued to strengthen the legal frameworks for the pursuit and prosecution of all war criminals are fully supported by the principles of morality and social justice and must be given widespread support.

War is no excuse. The demands of justice remain in place. A crime is a crime, whether committed in the context of conflict or not.

The second point I draw from Catholic moral thinking and teaching is this.

Human sexuality is a strong and vital component of our humanity and of each person’s nature. The exercise of that sexuality, in sexual relations, is something that touches the deepest aspect of our identity and personhood.

A fundamental aspect of the Church’s teaching about sex is that sexual acts must always take place within the context of authentic freedom.

This is because, properly understood, human sexuality has the capacity to unite two people, body and spirit, at the deepest level, in a completeness of self-giving that has within it the call to a permanent commitment between them and which, of its nature is open towards the creation of new human life.

What is most relevant in this teaching for us today is that there is no place in sexual relations for brutality, aggression or any kind of de-humanisation of a person.

This Initiative is concerned to highlight that the use of sexual violence is always and absolutely a violation of human freedom and of every rational standard of human decency. And what is more, its de facto cultural acceptance in many places and in so many circumstances contributes significantly to the degradation of women in particular.

Sexual behaviour is so often the key litmus test of the honour and respect given to women either in conformity to moral standards or in defiance of them.

What is clear, therefore, is that the Church wholeheartedly backs every initiative to prevent sexual violence being perpetrated against anyone, anywhere and under any circumstances. The justice at the heart of human sexual relations must be respected as integral to all justice, even in conflict and warfare.

I am proud today to be able to point to the significant work carried out by many religiously motivated people in the fight against sexual violence in warfare and its dreadful consequences.

I salute especially the work of religious sisters, in many countries, who for decades have dedicated themselves to this work, without seeking reward or praise.

They do so as part of their commitment to justice in our world today. And we are richer for their efforts, along with the efforts of many others, too. This enterprising work generates the kind of wealth without which our world cannot survive. They are, in my view, at the top of the world’s rich list!

The third point I wish to make flows directly from this notion of integral justice as our greatest wealth.

In the efforts of this Initiative to prevent sexual violence, we rightly speak of wanting to protect the human rights of everyone, especially the most vulnerable and the victims of this terrible form of abuse. In order for this language of human rights, and the framework it offers, to be robust, I believe we are helped by clarity about its foundations.

The entry of human rights into the international legal framework is largely welcomed. But human rights themselves do not derive from a legal system, nor a political authority, or a state.

The dignity of every person, and the pattern of rights which flow from that dignity, are inherent in the person, herself or himself. They are inalienable.

Often, of course, there are choices to be made between competing human rights and difficult decisions ensue. But some rights are more immediate, more fundamental than others. I believe that this priority of human rights can best be seen when they are understood in the light of their ultimate origin.

The dignity of every person arises from within their nature and that nature is most clearly understood as deriving from its Creator, from the mystery of God. Here the light of faith sharpens our rational understanding, it deepens our sense of who we are and the dignity which is properly ours.

Sexual violence as an instrument of warfare and conflict is a deep wound in the body of humanity, to borrow a phrase of Pope Francis. That it is as old as humanity is a cause for our lasting shame.

That this Initiative is daily growing in strength, that it is beginning to engender a common will to say ‘no more, never again’ is a source of real encouragement.

That it is producing the statutes and instruments by which perpetrators will be prosecuted and punish is a measure of its initial success. That it will in time challenge and change the cultures which tacitly support these crimes and heap the stigma of shame on its victims is a cause for real hope. I congratulate all involved and I assure you of my full support.”