Cardinal Nichols calls for rebuilding of Christian communities in Iraq 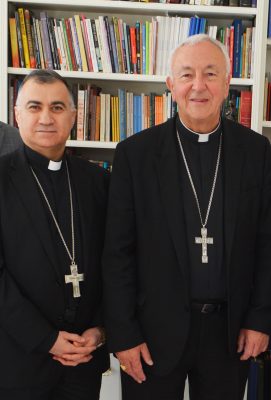 Urgent support is needed for the persecuted minority and Christian communities in Iraq, some of whom have a 2000 year presence in Ninevah and have been pushed to the brink of extinction.

This is according to Cardinal Vincent Nichols, Archbishop of Westminster, who said in a statement: “The need to reconstruct towns and villages [in Iraq’s Nineveh Plains] destroyed by Daesh (ISIS) and rebuild trust in that region is pressing.”

The Cardinal’s message followed his meeting with Iraq’s Chaldean Catholic Archbishop, Bashar Warda of Erbil, who visited London in May. This was facilitated by the Catholic charity Aid to the Church Need (ACN), which has been providing vital emergency and pastoral help for persecuted Christians in the region.

During his London visit, Archbishop Warda asked Foreign Secretary Jeremy Hunt for UK aid for persecuted Christians in Iraq. He also asked the British government to urge Iraq to safeguard the presence of minorities, whose numbers have fallen drastically.

From a pre-2003 total of 1.5 million, Iraq’s Christian population has fallen so low that there are fears for its survival. There has even been talk of a declaration of genocide by Daesh against minorities in the region.

Cardinal Nichols visited this region in Iraq four years ago, just after Daesh militants invaded and forced entire communities in Nineveh and nearby Mosul to flee in fear of their lives.

The Cardinal, who is President of the Catholic Bishops’ Conference of England and Wales, stated: “We visited numerous refugee camps across Erbil, the plight of persecuted Christians and other minorities in those ancient lands has been of particular concern.”

Archbishop Warda thanked the Cardinal and other bishops who have visited Iraq in support of the Christian community there. He said of the Cardinal: “His guidance since our darkest hours has helped me immensely and given me much needed strength to fight for our continued existence in our ancient land.”

When he was in London, Archbishop Warda said that there was an urgent need to help Christians wanting to stay in Iraq.

For displaced Christians and others arriving in Erbil and elsewhere, ACN has provided food, shelter, medicine and schooling. After the communities began returning following the expulsion of Daesh, ACN began rebuilding homes, convents, churches and other structures. Nearly half of the families forced to leave Nineveh in 2014 are now back in the region.