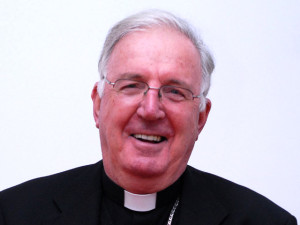 The people of Kilkenny are to remember their patron saint, St Canice, in a new ‘Light of Hope’ project this month.

The event, organised by St Canice’s parish in Kilkenny, will be conducted each Wednesday during October and will take the form of discussions, prayer services, and audio visual events culminating in the ‘Light of Hope’ evening session.

The evening event will consist of a chaired talk and discussion by invited guest speakers including the former Archbishop of Westminster, Cardinal Cormac Murphy O’Connor, who was and leader of the Catholic Church in England and Wales until his retirement in April 2009.

The programme of events commences on 7 October when Sr Noelle Corscadden, leader of the Loreto Sisters worldwide, will speak on the topic ‘Staying at the Table’.

A special Mass and ceremony will take place at the Loreto convent in Kilkenny city earlier in the day.

On 14 October, Trócaire’s Humanitarian Coordinator, Kilkenny-native Conor O’Loughlin, will speak on the theme of ‘Solidarity with the Stranger’.

Among the events taking place earlier in the day are a workshop run by Trócaire volunteers who have returned from abroad and a confirmation class from a local primary school.

The undoubted highlight of the programme comes on 21 October when the former Archbishop of Westminster, Cardinal Cormac Murphy O’Connor, visits Kilkenny.

He will speak on the topic entitled ‘Pope Francis: Witness to Mercy’.

The Cardinal will also celebrate Mass and bless the third Light of Hope Candle in St Canice’s church.

The final speaker on 28 October will be Dr Breda Lynch who is a medieval church historian with the Office of Public Works in the Southeast.

She will speak on renewal, reform in the ‘Medieval Irish Church: A Template for Today’.

A visit to Kennyswell for a prayer service as well as the showing of a film entitled ‘Of Gods and Men’ will also take place as part of the conclusion of the project.