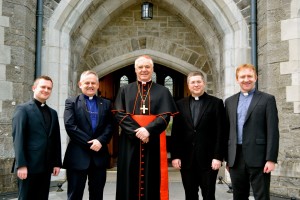 Cardinal Gerhard Müller, Prefect of the Congregation for the Doctrine of Faith, with the seminary council in Maynooth.

The prefect of the Congregation for the Doctrine of Faith, the Vatican’s watchdog on doctrinal orthodoxy, visited the national seminary in Maynooth last weekend at the invitation of Mgr Hugh Connolly, President of St Patrick’s College.

While in Maynooth on Saturday, Cardinal Gerhard Müller, delivered an address to seminarians.

The top Vatican official began his visit by celebrating the Eucharist in the College Chapel at midday, and lunched afterwards with the staff and students in Pugin Hall.

This was followed by his talk on the Catechism of the Catholic Church.

Later, Cardinal Müller toured the Russell Library and was presented with a leather bound copy of the History of Maynooth College by the late Mgr Patrick J. Corish.

Speaking to CatholicIreland.net, Mgr Connolly said Cardinal Müller had visited the college as a younger man almost 40 years ago.

The visit by the CDF prefect comes two years after the Apostolic Visitation to the Irish Church recommended that the Irish seminaries introduce more consistent admission criteria in their selection of candidates to the priesthood.

It also called on the seminary to show greater concern for the intellectual formation of seminarians, ensuring that it is in full conformity with the Church’s Magisterium; and ensure that the seminarians’ living quarters were closed off to the public.

However, Mgr Connolly told CatholicIreland.net that the Apostolic Visitation “was not referenced at all nor was there any discussion of formation issues nor indeed was there any business meeting between us of any kind.” 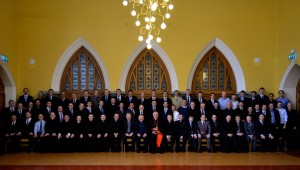 He added, “The visit was very friendly and cordial and very warmly supportive of the seminary community.”

According to the President of St Patrick’s College, “The Cardinal delivered a paper on the enduring value of the Catechism of the Catholic Church and responded openly and at length to questions on the same subject from the floor.”

On Sunday, Cardinal Müller concelebrated Mass in Dublin’s pro cathedral with Archbishop Diarmuid Martin and the papal nuncio, Archbishop Charles Brown, where he preached on vocations to the priesthood.