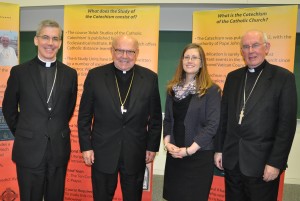 The retired Prefect of the Congregation for the Doctrine of the Faith, Cardinal William Levada, has expressed his concern over the several generations of catechism-‘lite’ Catholics in an address in Maynooth.

The Cardinal made his comment as he spoke about the issues of evangelisation, catechesis and the Year of Faith at Saint Patrick’s College last week.

Cardinal Levada is an American Cardinal who served as Prefect of the Congregation for the Doctrine of the Faith from May 2005 until June 2012. Originally from Long Beach, California, he served as Archbishop of Portland (Oregon) and Archbishop of San Francisco.

He was invited to address the topic, ‘Every Year a Year of Faith: The Catechism of the Catholic Church on its 20th anniversary’ by the Steering Committee of Adult Studies of the Catechism.

The Cardinal recalled that Pope John XXIII’s opening address at the Council stated, “The greatest concern of the Ecumenical Council is this: that the sacred deposit of Christian doctrine should be guarded and taught more efficaciously.”

Discussing Porta Fidei and the Catechism of the Catholic Church, Cardinal Levada said of the many things to which the Council Fathers turned their attention, “catechesis was not paramount among them; nor was there any call during the Council for a catechism for the universal Church.”

He noted that tensions between ‘conservatives’ and ‘progressives’ that marked the years leading up to the Council “did not simply disappear.”

“Indeed, as indicated above, during and after the Council the key was transposed, but the melody of these tensions continued, as both sides sought to have their interpretation of what the Council said and did prevail,” he said.

In the American prelate’s view these tensions had a particularly problematic effect on catechesis.

“By an overemphasis on the ‘spirit’ of the Council, in some circles the idea was promoted that the Council’s documents were a kind of open-ended invitation to continued speculation and development,” he commented.

This had the effect on catechesis of down-playing the content of the faith (for fear of ‘taking sides’ or dealing with contradictory opinions among catechists and other authorised teachers of the faith), even of ignoring what the Council Fathers actually said in their 16 final documents.

This, he suggested, had the further effect of producing … several generations of catechism-“lite” Catholics.

Elsewhere in his address, Cardinal Levada said Catholics today need a “catechumenate” that embraces the developing child from infancy to adulthood – one that prepares them to know their faith and live it, and to be able to give “the reasons” for it.

“Like the adult catechumenate which prepares for the reception of the sacraments of initiation at the Easter vigil, this much longer catechumenate (lasting from infancy to adulthood) would be marked by both catechesis and ritual, with the involvement of the Church (parish) community in appropriate ways.”

Outlining his own views on what is needed, he said it seemed to him that such a catechumenate would have a clear goal: it would seek not only to prepare young people to be faithful and faith-filled disciples of Christ, aware of his presence in their lives, but also to be apostles of Christ’s transformative grace and power for the good of the world as such.

Referring to his visit to Ireland, he described it as “a joy”.

Ireland, he said, “which for 1500 years has been a dynamic centre of both these aspects of the Church’s mission.”

“One thinks of the extraordinary and rapid evangelisation of this island by St Patrick; how skilfully he imparted the Trinitarian faith that had only recently been the focus of the great early ecumenical councils of the Church.”

The Cardinal paid tribute to the “catechising and evangelising efforts of generations of priests and sisters who came to every part of America to build up the Church by their efforts, as they did in so many places around the globe.”

“Whatever the challenges of the present moment, we cannot ignore the magnificent heritage left before us for our own efforts in this new and changed context,” he said.