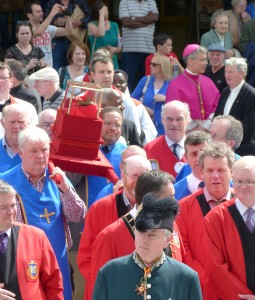 The Primate of All Ireland, Cardinal Seán Brady, will lead the procession and celebrate Mass to mark the anniversary of the beatification and canonisation of St Oliver Plunkett this Sunday.

The Archbishop of Armagh will be joined by Bishop Michael Smith of Meath for the 2014 Festival of St Oliver Plunkett in Drogheda.

The festival marks the beatification of St Oliver by Pope Benedict XV on 23 May 1920 and the 39th anniversary of his canonisation by Pope Paul VI on 12 October 1975.

The festival Mass will take place at 4pm in St Peter’s Church in West Street, Drogheda, the memorial church for the martyred Archbishop of Armagh.

Cardinal Brady and Bishop Smith will celebrate the Mass with Dom Aidan Bellenger, Abbot of Downside Abbey, who will preach the homily.

Downside Abbey in Somerset is the location of St Oliver’s tomb since his remains were transferred there c.1883 from Lamspringe in Germany.

One of the features of the day will be the ‘Procession of the Relics’ of the Saint, whihc will be brought from the Diocese of Meath across the River Boyne into the Archdiocese of Armagh.

The procession will leave the Holy Family Church, Ballsgrove, south of the River Boyne, at 3pm and proceed to the National Shrine of St Oliver Plunkett in St Peter’s Church.

A number of pilgrims from Germany will be present in Drogheda for this year’s event.

Each year thousands of pilgrims visit St Oliver Plunkett’s shrine to venerate his relics and to learn about the Saint’s extraordinary life story.

St Oliver Plunkett, a former Primate of All Ireland, was martyred in Tyburn in 1681. He was canonised as a martyr by Pope Paul VI in 1975. He was ordained a priest for the Diocese of Meath in 1669.

The Patron saints of the Archdiocese of Armagh are: St Patrick, St Malachy and St Oliver Plunkett.