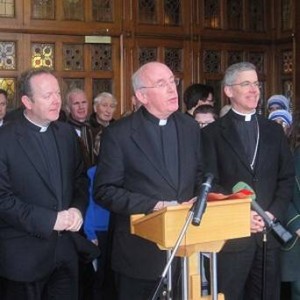 The Primate of All Ireland has invited the faithful to come to Knock today to attend the consecration of Ireland to the Immaculate Heart of Mary.

Speaking ahead of the ceremony in Co Mayo, Cardinal Sean Brady said he was “looking forward” to being at the national shrine “to ask Mary’s maternal blessing on the people of Ireland.”

The Cardinal described the Feast of the Assumption as one of the biggest days of the year in Knock.

He urged the faithful who are unable to attend to join in the “beautiful devotional act by praying the prayer of entrustment in their homes and parish churches.”

The ceremony begins at 2:30pm with the anointing of the sick and Mass follows at 3pm. This will then be followed by the Rosary and Benediction and then the prayer for the Consecration of Ireland to the Immaculate Heart of Mary will take place at the end of the ceremonies

Cardinal Sean Brady will be joined in Knock by Archbishop Eamon Martin, who will be the principal celebrant and the homilist, as well as other archbishops, bishops, priests, religious and pilgrims.

Consecration to Our Lady is well-attested in the tradition of the Church. The Consecration of Ireland to the Immaculate Heart of Mary will take place when Cardinal Brady prays a specially composed dedicated prayer.

It is the people of the island of Ireland that are being consecrated.

The Prayer of Consecration will entrust families, homes and the dioceses of Ireland to Jesus through the Immaculate Heart of Mary and it calls on her to watch over the young people of Ireland.

According to the Catholic Communications Office in Maynooth, as the universal Church is currently celebrating a Year of Faith, “it is fitting that the Act of Consecration calls to mind Mary, the woman of faith par excellence and asks for her prayers for the people of this country.”