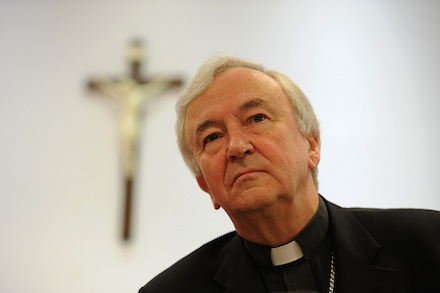 CSAN, the social action arm of the Catholic Church in England and Wales, has expressed its delight that its patron, Archbishop Vincent Nichols, is about to be elevated to the cardinalate.

Speaking on the day before the consistory in Rome, CSAN Chief Executive, Helen O’Brien, said “Archbishop Nichols is a consistently powerful advocate of social justice.”

She added that his elevation would “reinforce the Church’s social action mission.”

“On issues ranging from the removal of the welfare safety net to the challenges facing migrant communities, he has shown inspirational leadership rooted in the Church’s preferential option for the poor and its defence of human dignity,” Helen O’Brien said.

“For many people this is a period of intense hardship, often resulting from unprecedented cuts to the welfare system or tough new immigration legislation. Archbishop Nichols’ appointment as Cardinal will undoubtedly reinforce the Church’s response and its social action mission here in England and Wales.”

“During the past week Archbishop Nichols has been outspoken on the erosion of the welfare safety net, re-asserting his message to CSAN’s Conference ‘the Catholic Response to the Poverty Crisis’ last year, when he told politicians, charity representatives and clergy that: ‘Support should be available to ensure that the absence of earned income does not result in unsustainable hardship.’”

“He continued, ‘A social safety net that fails to protect essentials such as food and shelter for those who cannot work, is not worthy of being regarded as a safety net at all.”

During that conference he also stressed the importance of the Living Wage as a mechanism for tackling in-work poverty.

The future Cardinal said, “More than five million workers bring home an income insufficient to cover basic outgoings and the significant majority of child poverty exists in working households…this lays down a challenge not only to the state but to the private and social sector – indeed to all those upon whom people depend for their livelihood. The Church itself is no exception.”

Negative rhetoric around immigration is another area of concern to the new Cardinal, according to Helen O’Brien.

This week he suggested that there should be “a positive appreciation of the contribution that people who come to this country make to our well-being and economy…we should not have a discourse about immigration which is based on fear.”

Meanwhile, Cardinal Cormac Murphy-O’Connor celebrated Mass in his titular church of Santa Maria Sopra Minerva on the eve of the consistory, and prayed for Cardinal-designate Vincent Nichols.

He noted that it was “the first time that there have been two cardinals in England since Blessed John Henry Newman and Cardinal Manning both held that office.”