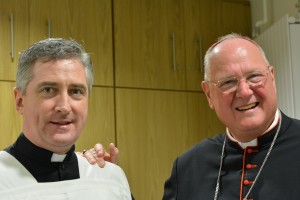 “What has hit me most is the friendliness of the people and the extraordinarily radiant hospitality; our people felt very much at home,” Cardinal Timothy Dolan of the archdiocese of New York’s pilgrimage to Ireland.

He was speaking to www.CatholicIreland.net on Friday in Knock about the reception given to him and his 165 pilgrims during their week-long stay.

Cardinal Dolan was in Knock to officially open the annual nine-day novena which is expected to draw crowds of up to 150,000 from 14-22 August.

He said so many Irish people have connections to America.

“They were especially appreciative that we highlighted the shrine in Knock and co-operated with the local authorities to give some prominence to the airport and to show the feasibility of doing a pilgrimage from the United States.”

“So many people thanked us for the efforts of the bishops and Catholics in the United States in their defence of immigrants and for calling for sound and fair immigration reform.”

“We still have a large amount of undocumented Irish immigrants in New York. I have pastors in the north Bronx who say that two or three times a week they have a requiem Mass with a ‘feigned’ casket for a parent or sibling of somebody in the parish who can’t go home – they could go home but they couldn’t return to the United States because their documentation isn’t in order.” 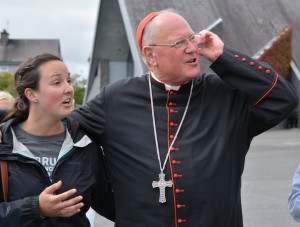 Cardinal Dolan concelebrated Mass on Friday at Knock basilica with Bishop Philip Boyce of Raphoe diocese and scores of priests.

Addressing the packed congregation, the Archbishop of New York told them it was a joy to be with them to open the novena at “a shrine so dear to my heart”.

The theme of this year’s novena is ‘Family and Marriage’.

Asked about his reaction to calls for Ireland’s abortion laws to be liberalised and for a repeal of the 8th amendment, Cardinal Dolan commented to CatholicIreland.net, “We in the United States have learned a lot from Ireland on the protection of innocent human life and the defence of the family and the importance of faith. These have been elements we are grateful to Ireland for teaching us.”

“I would say: stand firm. This is one of those areas where the exception becomes the rule,” he warned.

When Cardinal Dolan arrived with his group of 165 pilgrims last Sunday, the prelate underlined to them that their visit was spiritual in its motive.

“I told our people from the beginning ‘we’re not tourists – this is a pilgrimage’.” They had Mass in Lough Derg where they spent half a day instead of the traditional three days.

“The day was so raw and cold that our people got a good hint of the mortification and the self–denial associated with Lough Derg,” he explained.

In contrast they had a “glorious” day on the Dingle peninsula on Thursday when they visited the 6th century Christian Gallarus Oratory and they also visited a parish in Listowel and Killarney Cathedral. Today they will visit Ballintubber Abbey before returning home today.