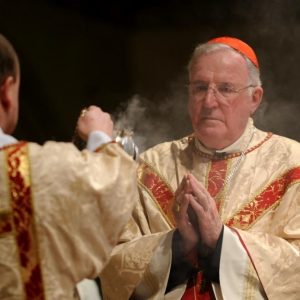 The Pope has said he was deeply saddened to learn of the death of Cardinal Cormac Murphy-O’Connor, the retired Archbishop of Westminster, who died on Friday, aged 85.

A son of Irish emigrants who travelled to England before the First World War, Murphy-O’Connor’s period as head of the Catholic Church in England will be remembered as a time when the Church enjoyed its warmest relations with the British establishment in centuries.

In January 2002, two years after he became Archbishop of Westminster, he preached during the Anglican morning service at Sandringham, the first time that a Catholic prelate had delivered a sermon to an English monarch since 1680. Also in 2002, he became the first cardinal to read prayers at an English Royal Funeral Service since 1509, when he attended the funeral of Queen Elizabeth, the Queen Mother, at Westminster Abbey.

He was ordained a priest of the Portsmouth Diocese in 1956 after studying for the priesthood at the Venerable English College in Rome. After spending ten years in pastoral ministry, he became private secretary to Bishop Derek Worlock, the first sign that he might be called to high office in the Church.

He spent a year as a parish priest in Portswood, Southampton, before being appointed rector of the Venerable English College in Rome. While he was there, he hosted the momentous visit to Rome in 1977 of the Archbishop of Canterbury, Frederick Donald Coggan, the head of the Anglican Communion.

Later in 1977, Pope Paul VI named him Bishop of Arundel and Brighton and he was consecrated in December of that year.

As a bishop, he was noted for his ecumenical work. For eight years, between 1982 and 2000, he was co-chairman of the Anglican-Roman Catholic International Commission (ARCIC). The UK press branded him a conservative, mainly because he always championed the right to life, but within church circles he was seen as a reformer.

After he was made a member of the College of Cardinals by Saint Pope John Paul II in 2001, he joined a group of European cardinals who met regularly in St Gallen in Switzerland to discuss changes that could be made in the appointment of bishops, collegiality, how bishops conferences functioned and the Church’s views on some aspects of sexual morality.

While these cardinals differed among themselves on a number of issues, it is said that as a group they opposed the election of Cardinal Joseph Ratzinger as Pontiff in 2005. Before that conclave, Cardinal Achille Silvestrini tipped Murphy-O’Connor as a possible successor to John Paul II.

At the 2013 conclave that elected Pope Francis, Murphy-O’Connor did not have a vote, as being aged over 80 barred him from being a cardinal elector. He had retired from his role as Archbishop of Westminster in 2009, at the age of 77, and was succeeded by Archbishop Vincent Nichols. He was the first emeritus Archbishop of Westminster in the history of the Catholic Church, but although officially retired, he led an active life and continued working as a faithful servant of the Church.

In a message of condolence to Cardinal Nichols, Pope Francis wrote: “Recalling with immense gratitude the late Cardinal’s distinguished service to the Church in England and Wales, his unwavering devotion to the preaching of the Gospel and the care of the poor, and his far-sighted commitment to the advancement of ecumenical and interreligious understanding, I willingly join you in commending his noble soul to the infinite mercies of God our heavenly Father.”

Archbishop Eamon Martin of Armagh also paid tribute to Cardinal Murphy-O’Connor’s “sterling commitment to Christian unity and his work for the relationship between all who follow Christ”.

He said that “Cardinal Cormac Murphy-O’Connor was a deeply spiritual priest, known for his warmth, good humour and humility. Any time I met him, he was always proud of his heritage and held great affection for the Church in this country.

“Conscious of his family connections in this country, I express, on behalf of the Irish Catholic Bishops’ Conference, my sincere sympathies to the family of the late Cardinal Cormac. I also want to express my condolences to Cardinal Vincent Nichols, the bishops, priests and faithful of Westminster diocese. I invite the faithful in Ireland to pray for the happy repose of the soul of Cardinal Murphy-O’Connor. Ar dheis Dé go raibh a anam.”