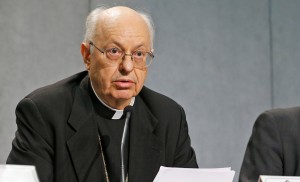 In his address on Monday to the Extraordinary Synod on the Family, Cardinal Lorenzo Baldisseri, Secretary General of the Synod of Bishops, called for a free discussion in which participants were could express what they believe.

Recalling the level and openness of the responses received to the Vatican’s questionnaire on the family last year, Cardinal Baldisseri said, “This broad freedom of expression must also characterise this synodal assembly, because expressing one’s convictions is always positive as long as it is done in a respectful, loving and constructive manner.”

He underlined that it was important for participants to feel free to express themselves “without fear or suspicion.”

Feeling free to express what is believed or what it is doubtful is what distinguishes a human being from other creatures and makes him a responsible person before God and men, the Cardinal said.

Underlining that the discussion at the synod must be open, he said that when differences arise, participants in their various roles are called not to stress their own interests or point of view but to seek the truth.

He said a new aspect of the synodal movement as desired by Pope Francis was that it was taking place over two stages – the Extraordinary Synod and the Ordinary General Assembly next year.

“This is an important and opportune time, a Kairos for the whole Church, where bishops and the faithful allow themselves to be guided by the Holy Spirit”, he said.

He said all participants were called to reflect and thoroughly examine, enlightened by the Gospel and the Church’s faith, the subject of the family.

Cardinal Baldisseri noted that the current synod differs from previous ones because instead of presenting a list of proposals to the Pope, the synod Fathers will vote on a final document (the relatio synodi) which will be presented to the Pope for his consideration.

He also welcomed the fact that the beatification of Pope Paul VI will be celebrated next Sunday 19 October at the conclusion of this Extraordinary General Assembly.

“Beatifying Pope Paul VI in conjunction with the synod is not only an important sign of collegiality and synodality but reflects the appropriateness of this action, because, after almost 50 years, the same Pope who led, concluded and implemented the Second Vatican Council, also established the Synod of Bishops and guided it in its initial years,” he explained.