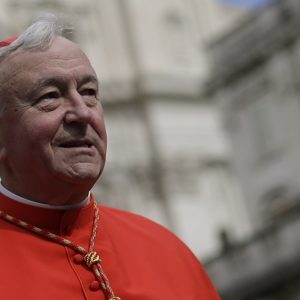 The head of the Catholic Church in England and Wales, Cardinal Vincent Nichols, has apologised for the church’s role in forcing unmarried mothers to give their children up for adoption.

The Archbishop of Westminster makes the apology in an ITV documentary, ‘Britain’s Adoption Scandal: Breaking the Silence’, which is due to be broadcast on Wednesday 9 November.

The programme details how, in the 30 years before local authorities were given responsibility for child welfare, tens of thousands of women were forced to give up their children by ‘moral welfare officers’ employed by church-sponsored voluntary organisations.

Cardinal Nichols told the programme makers that the church apologises for the “hurt caused” to the hundreds of mothers who were encouraged to give their babies up for adoption. He said the practices of these agencies in the 1950s, ’60s and ’70s “reflected the social values at that time.”

He said: “Sadly for unmarried mothers, adoption was considered to be in the best interests of the mother and child because of the associated stigma and the lack of support for lone parents.

“The practices of all adoption agencies, whether religious, charitable or state, reflected these attitudes and were sometimes lacking in care and sensitivity. We apologise for the hurt caused by agencies acting in the name of the Catholic Church.”

So far, the Church of England has not given a statement to the programme makers, but a spokesman told one British national newspaper: “What was thought to be the right thing to do at the time has caused great hurt. That is a matter of great regret.”

The Salvation Army has said it “sincerely sympathised” with one woman whose story features in the documentary, but the organisation stopped short of formally apologising for the practice of separating single mothers from their babies.

In Australia, where during the 1950s, ’60s and ’70s an estimated 150,000 women had their babies offered up for adoption against their will, the prime minister delivered a national apology to the victims in 2013.

In the same year in Ireland, Taoiseach Enda Kenny apologised to women who had been incarcerated in Magdalene laundries and similar institutions, but so far no apology has been made specifically to Irish women who had to give up their children for adoption against their will.