Special Mass for peace and reconciliation at the Capuchin Holy Trinity Church in Cork city on Sunday. 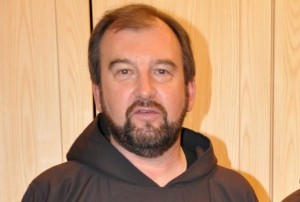 The head of the Capuchin order in Ireland has expressed concern over the political vacuum today with no government nearly six weeks after the general election.

At a special Mass for peace and reconciliation at the Capuchin Holy Trinity Church in Cork city on Sunday, the Capuchin Provincial Br Adrian Curran told the country’s politicians it was time for their “choreography, more akin to the old Irish dance halls, to cease”.

He urged them “to move beyond political ambitions, strategising and party interests to a serious and honest engagement in order to form a Government for the people, in the national interest”.

“Is it not a scandal that in these first months of this centenary year of the Rising, there are 1,830 children homeless – the highest numbers on record?” he challenged.

The Capuchin friar warned that the volunteerism of charities “temporarily bandaging the wounds of homelessness and poverty” could only go so far and that only a Government could effect real change for the homeless and the 117,000 mortgage holders in arrears, as well as address the problems in healthcare, industrial relations issues in education and transport and the migrant crisis.

The Mass was attended by Bishop John Buckley of Cork and Ross, the Lord Mayor of Cork, Cllr Chris O’Leary, the Minister for Defence, Simon Coveney, the retired Church of Ireland Bishop of Limerick, the Rt Rev Michael Mayes, as well as relatives of those who were involved in 1916 and those who also served in the British forces.

2016 Br Curran said, was a “significant year” for the Capuchin friars because they are celebrating the 400th anniversary of the arrival of the first Capuchins friars in Ireland.

“Throughout these 400 years, we have always endeavoured to be close to the people, especially those in greatest need, which has in some places led to our designation as ‘brothers of the people,’” he explained.

He added, “We have had a long history of engagement with the people at the margins of society. We have always felt that we could not speak to the people on equal terms, unless we tried to address the immediate problems they faced like poverty, poor housing conditions or even Ireland’s struggle for political autonomy and independence.”

Turning to 1916, he said the role played by the Capuchin friars during and in the aftermath of the Rising of 1916 was “a remarkable story and it is fitting that as we mark the centenary of the Rising, we remember it”.

He recalled that at great risk to their own lives, the friars became involved in the events of Easter week at every level: some provided spiritual solace to the Volunteers engaged in the conflict, hearing their confessions at their request at the barricades. Some provided practical assistance to those who were injured, many of whom were first treated in the Fr Mathew Hall, next door to the Capuchin Friary on Church Street during the week, which became a first-aid post and field hospital with the assistance of Cumman na mBan.

The friars were in attendance there all week and they also helped carry the more seriously injured to the Richmond Hospital, where they also ministered.

“The Feis Maitiú was in full swing (Dublin) on Easter Monday 1916, when the first shots of the Rising were fired, literally on the Capuchins’ doorstep in Church Street. Around lunchtime, a visitor to Dublin was shot on the Street and Fr Columbus Murphy from the Western Road in Cork, carried him to the Friary for medical attention.  Within minutes, the first child-casualty of the Rising was killed in crossfire, while being wheeled in his pram by his mother just outside the Church. His name was Seán Foster (2 years).”

Br Curran Ofm Cap told the packed Holy Trinity Church in Cork that it is often forgotten that while Irish Capuchin friars were ministering to volunteers in Dublin in 1916, other friars were at the same time, acting as chaplains and providing spiritual comfort to Catholic troops (including an estimated 200,000 Irish men and women) serving in the British army during the First World war – in fact one friar left for the front that very Easter week.

He prayed for the authors of the 1916 Proclamation, who he said were men of faith who dreamed dreams of hope for Ireland for the Irish people.

“Today, as people of faith in the Risen and Merciful Christ, we pray for the leaders of the Rising who gave their lives for the cause of our freedom and independence. We pray for all the men, women and children who died violently in 1916, on whatever side or none.”

“We pray for the British soldiers and the members of the Royal Irish Constabulary and Dublin Military Police who died on the streets of Dublin, many of whom were Irish themselves. We remember the 580 Irish soldiers who died on the Western Front in the First World War during that same Easter week. And we pray too for all those who died during the violence in Northern Ireland in the more recent past.”

While acknowledging the rightness of commemorating the Rising and its leaders, the leader of the Capuchins in Ireland said it was not enough to remember, reflect and re-imagine.

“Our commemorations should not consist simply in looking back or even in envisioning the future, but should arouse us all, to do what is necessary to effect the changes we need to make, to give life to the aspirations – many of them still unrealised – of the ancestors we commemorate.  We are called to action.

“People may argue about the question of the mandate the leaders of the Rising had or didn’t have for their actions – I will leave that for another forum, but a mandate was given by the people – however disconcerting, disappointing even awkward it might be for some, to our elected Teachtaí Dála almost 6 weeks ago and still we have no Government!,” he said.

He warned that the volunteerism such as we see from Focus Ireland, the Peter McVerry Trust, the Vincent de Paul, the Simon Community, the beloved Cork Penny Dinners here in this city and our own Capuchin Day Centre and Food projects can only do so much; temporarily bandaging the wounds of homelessness and poverty, but only a Government can effect real change for the Homeless People of 2016, for the 117,000 mortgage holders in arrears which has let to record numbers of house re-possessions.

“A government is needed to deal with the ongoing and intractable Health and Hospital concerns, the current and impending industrial relations issues in Education and Transport and the Migrant crisis, the response to which has been less than noble, adequate and generous so far.  These are but some concerns demanding urgent Government action,” he challenged.

Speaking ahead of the Mass in Cork, the Bishop of Cork and Ross appealed on Sunday for the commemorations of 1916 to respect “all past differences” and warned that they must not “glorify violence retrospectively”.

He said the Mass for peace and reconciliation at the Capuchin Holy Trinity Church in Cork city, was a time for reflection not celebration. “We visit our history, not to find what divides but what unites us,” he said.

“If we only remember one side, we are telling ourselves that the conflict is not truly over.” He welcomed the unveiling of the Commemorative Wall in Glasnevin Cemetery in Dublin bearing the names of all who died in 1916 from all sides.

Expressing concern that celebrations would contribute to increased tension in Northern Ireland, the bishop said the Good Friday Agreement “democratically and peacefully removed any remaining cause of conflict”.

“There is no moral legitimacy whatsoever for violence today,” he stated.

During the Mass, attended by over 1,000 people, prayers were said for the 485 men, women and children who died violently in 1916 “on whatever side or none”. The British soldiers and RIC members who died on the streets of Dublin, many of whom were Irish, were also remembered as well as the 580 Irish soldiers who died on the Western Front in the First World War during Easter Week 1916.