Proceeds to help the work of the Capuchin Day Centre in Dublin. 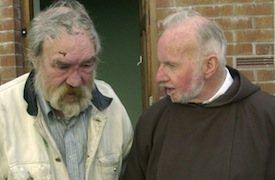 The 10th annual walk in aid of the homeless organised by the Capuchin Day Centre in Dublin takes places today.

Volunteers, Joan McNevin and Paddy Pender, will undertake a 20km walk around the capital.

They are asking the people of Dublin to support and contribute to their fundraising efforts by donating whatever they can in aid of the homeless people the day centre support.

The walk begins at 2pm from the centre at Bow Lane towards Busaras, the South Quays, Harold’s Cross via TCD and Dame Street, Long Mile Road, Naas Road and then following the Luas Red line back towards the city and the Day Centre.

At the moment, the centre, which was founded in 1974 by Br Kevin Crowley, OFM Cap distributes 1,200 food parcels every week and provides nearly 600 meals six days a week, including to many of the new poor.

The Centre originally occupied two small rooms at the rear of the Capuchin Friary fronting onto Bow Street and offered a basic service of soup and bread.

At the time, demand for day care facilities was growing as the homeless of Dublin were not allowed to occupy hostel accommodation during the day.

About 50 meals were provided to mostly men, some with significant alcohol addictions, living either rough or in hostels.

In 1976, a pre-fab was built funded entirely by donations from the public. By the mid-1980s, increasing levels of unemployment and social dislocation in Dublin’s inner city resulted in a significant increase in users of the Day Centre and food parcels were distributed to meet the nutritional requirements of families who could not survive on welfare benefits.

In addition, provision had to be made for the extension of the service to women and children who were now availing of the service.

By 1995, around 200-300 people were accessing services at the Day Centre. Young people (particularly those suffering from drug addictions) were displacing more traditional users and there was visible increase in levels of child poverty.

With an increasing demand for an expanded service to include education and medical support, it was clear that the old premises could no longer cope.

A new Day Centre was built in 1997, which offered a dramatic improvement in quality and hygiene standards.

However, a huge increase in costs was incurred as a result of a demand for food parcels and the Capuchins were forced to seek direct government aid to overcome the deficit.

The current economic downturn has dramatically increased those on the poverty threshold and the Centre has seen a threefold increase in users.

The recession has also resulted in a significant cut in the amount of government support for the Centre.

The centre also provides a chiropodist, training skills, a nurse, and clean clothing to the homeless of Dublin.

For information on how to support the work of the Capuchin Day Centre see www.churchandhalston.irishcapuchins.com/Day_Centre.html