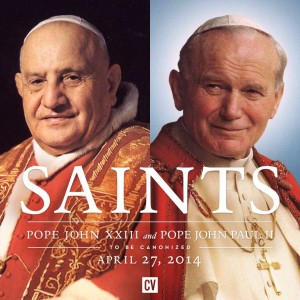 A number of cinemas in Ireland will broadcast the canonisation ceremony of John XXIII and John Paul II live from Rome on 27 April.

Preparations are underway all over the world not least in Rome where five million people are expected to attend the ceremony.

It is the first time two popes are being canonised together.

Initially it was daubed a ‘no frills’ occasion.

However, the use of media to broadcast it all over the world has increased global interest and is contributing to the buildup.

A number of cinemas in Ireland will broadcast the unique event according to a website feature just launched by the Irish Bishops’ Catholic Communications Office.

The Vatican Television Centre will use up to 33 TV cameras and nine satellites to record the event, and will work with other TV companies like Sky, Sony, Eutelsat, Globecast, DBW Communication and Nexo Digital to broadcast it worldwide.

Speaking about the broadcast plans, Archbishop Claudio Maria Celli, president of the Pontifical Council for Social Communications, said the communications technology being used offers a “great opportunity for relationship, knowledge, participation, an opportunity to live history.”

The Vatican’s approach to this major event goes beyond TV or 3-D cinema screens, as it will also be broadcast via internet, on Twitter, Facebook and other digital platforms in several languages.

Other social media sites, including Instagram and Storify, will also be used to communicate the event to young people around the world.

Pope John Paul II was so popular with young people that there are many social media initiatives planned for his specific canonisation.

David Bush, marketing director of Sony Europe, which has a long-standing partnership with the Vatican media, said: “Our wish is that it helps to bring the emotion of the event to all of those many millions of people and the world who want to physically be there.”

He added, “That is the goal of technology — to try and replicate the experience of being in St Peter’s Square.”

Roughly 500 cinemas will air the ceremony live in 20 countries, including Colombia, Brazil, the US, Spain, Austria and the UK.

Apart from the ‘virtual’ and TV screenings from St Peter’s Square for the canonisation ceremony, there will be several events in Ireland. Celebrations include special masses at Ballybrit Racecourse, Knock Shrine and Clonmacnois.

A Pilgrim Walk of Thanksgiving will take place during Easter Week from Dublin to Clonmacnois commencing on Tuesday 22 April and concluding on Saturday 26 April.

On Saturday 3 May, at the Pope’s Cross (Papal Monument) in Killineer, Co Louth, people will gather to celebrate with Archbishop Eamon Martin, Coadjutor Archbishop of Armagh with prayers, music and excerpts from the address of Pope John Paul II when he spoke there in September 1979.

Members of the Polish community will participate in this event.

At St Patrick’s Cathedral in Armagh, the canonisations will be celebrated on Sunday 27 April, which is also the Feast of Divine Mercy.

Dr Gerard McGinnity will lead the celebration of Divine Mercy beginning at 2.30pm. The conclusion is a Mass celebrated by Archbishop Eamon Martin at 5.30pm.

Details of events and screenings are available on the Catholic Communications Office’s special web feature, which also includes background information on the two new saints; the process of becoming a Saint; and details of Irish bishops attending the canonisation.