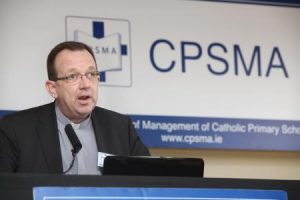 An education specialist who is a priest of the diocese of Cork and Ross has been chosen by Pope Francis to succeed Bishop Michael Smith in the diocese of Meath.

The announcement of Pope Francis’ appointment of Canon Thomas Deenihan was made this morning at 11am following the celebration of 10am Mass in the Cathedral of Christ the King, Mullingar.

Congratulating Canon Deenihan on his appointment, Bishop John Buckley described him as one of the most experienced and highly qualified priests in the Irish Church in the field of education.

“There are few, if any, aspects of the operation and governance of Catholic schools that Canon Tom has not dealt with over the past 27 years whether it was chairing Boards of Management, interviewing prospective teachers and principals, or addressing interpersonal problems between management and staff or conducting discussions with the Department of Education and Skills – Canon Tom has done them all with an enviable sureness of approach,” Dr Buckley said.

He also highlighted how as chairman of one secondary school board, Canon Deenihan played a key role in the smooth merger of two schools in the same town without acrimony or complaint on the part of parents or teachers – “not an easy achievement after decades of local rivalry in academic and sporting achievement”.

Since ordination, he has worked in Glanmire Parish (1991-1994), taught in St Goban’s College Bantry (1994-2003) during which time he also worked in the parishes of Schull, Kealkil and Bantry.

He has a Masters and Doctorate in education.

In 2003, Bishop John Buckley of Cork & Ross appointed him as Diocesan Advisor for Post-Primary Catechetics and, in 2006, as Diocesan Secretary and Diocesan Education Secretary. He currently holds these positions.

On a national level, Bishop-elect Deenihan served as General Secretary of the Catholic Primary Schools Management Association from 2013 to 2016, and as acting-executive secretary to the Council for Education and to the Commission for Catholic Education and Formation of the Irish Episcopal Conference from 2016 to date.

Bishop-elect Deenihan is a member of the Honan Governors at University College Cork; a member of Mercy Care South, a Diocesan Public Juridic Person for the Mercy University Hospital in Cork; and is chair of the Board of Directors of the Christian Leadership in Education Office.  In 2017, Bishop Buckley appointed him a Canon and a member of the Cathedral Chapter in Cork.

In Mullingar this morning, Bishop-elect Deenihan said, “My initial reaction was one of fear and there have been sleepless nights since. There is an acute sense of being unworthy for the task, the enormity of the task and a deficit too in local knowledge.”

In his statement, the Bishop-elect said he was conscious that linked to pastoral ministry is joy.

“Pope Francis referred to this in Evangelii Gaudium (85) when he stated that one of the more serious temptations which stifles boldness and zeal is a ‘defeatism that can turn us into querulous and disillusioned pessimists, sourpusses’! May I ask you to pray with me that we will keep and value that sense of joy as we work together in continually building and sustaining a welcoming and compassionate Church.”

He paid tribute to “the pioneering work that has already been undertaken in relation to sacramental preparation for children not attending Catholic Schools” in Meath and praised Fr Declan Hurley and the experience in Navan.

Of Catholic schools, the incoming Bishop of Meath described them as “an important part of the ministry of the Church” and added that the Church must support parents who wish to send their children to a Catholic school.

The Primate of All Ireland, Archbishop Eamon Martin welcomed today’s appointment of Canon Deenihan as the new Bishop of Meath.

“Bishop-elect Deenihan’s background in education, serving as General Secretary of the Catholic Primary Schools Management Association from October 2013 and as Acting Executive Secretary of the Council for Education of the Irish Episcopal Conference from July 2016, as well as his role as Diocesan Secretary in his home dioceses of Cork & Ross highlights some of the rich experiences that he will bring to the people of his new diocese. I look forward to working alongside Bishop-elect Deenihan in the Irish Bishops’ Conference and I pray that his new patron, St Finian, will guide him in his ministry,” the Archbishop said.

He continued, “On this day I also wish to express my deep gratitude to Bishop Michael Smith, Bishop Emeritus of Meath, the longest serving bishop in Ireland. For almost fifty years, Bishop Smith has made an outstanding contribution to the work of the Irish Catholic Bishops’ Conference, as its first Executive Secretary, and then as a highly committed Episcopal Secretary and member. He is highly respected by his brother bishops, and, as a relative newcomer to the Conference myself, I have valued highly his contributions and his warm personal encouragement. His wisdom and insights into recent ecclesial history in Ireland are unparalleled, including his first-hand experience of the Second Vatican Council and of the planning for the 1979 visit of Pope St John Paul II. I pray God’s blessings on him and wish him good health and happiness in retirement.”

Bishop Smith in a statement said he believed the appointment of Bishop-elect Deenihan would “greatly benefit the Church in the Diocese of Meath and will also contribute significantly to the work of the Irish Episcopal Conference and its commissions and agencies”.

In his statement of congratulations, Bishop John Buckley said that over the past 27 years of his priesthood, Canon Tom Deenihan had held a variety of appointments that have prepared him well for his new duties as Bishop of the historic Diocese of Meath.

“He is a man of strong faith, good judgement, very committed to his priestly duties and fully realising that our lives as priests can only be sustained by prayer.”

“Perhaps the most influential experience, as a preparation for a future bishop, was his work as Cork and Ross Diocesan Secretary. Not only did this office call for faultless accuracy in record-keeping and familiarity with State legislation but also demanded a sensitive, effective and affective approach in interacting with office personnel and the various Diocesan committees. The post of Bishop’s Secretary demands the greatest tact and prudence.”

“In that role, Canon Tom was a faithful servant and a wise one. He took responsibility for administration which allowed me, as Bishop, to exercise the primary function of a bishop, the pastoral care of the people in the Diocese.”

“As his Bishop, I am very grateful to him for his knowledgeable and respectful service to me and to the Diocese. I wish Canon Tom every joy, blessing and happiness in his new role as Bishop of Meath.”