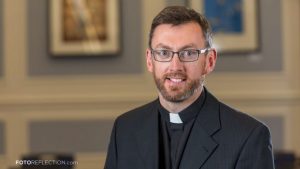 A young Irish Jesuit has been ordained to the diaconate in Canada by the Jesuit Archbishop of Ottawa, Most Reverend Terrence Prendergast SJ.

Eddie Cosgrove SJ was ordained in Toronto where he has spent the past three years studying theology at Regis College, the Jesuit school of Theology at the University of Toronto.

Originally from Dromahair, Co Leitrim, the 36 year old was ordained a deacon after nine years of preparation on Saturday 21 May along with three classmates – Matthew Dunch SJ (Chicago-Detroit), Pierre Edward Luc SJ (French Canada and Haiti) and Sylvester Tan SJ (US Central and Southern).

At the same ceremony Paul Robson SJ (English Canada) was also ordained to the priesthood.

The ordination took place in Our Lady of Lourdes Parish which is the Jesuit Church in Toronto.

The new deacon’s father and mother, Eamonn and Margaret Cosgrove, and his sister Maria travelled from Ireland for the ceremony while his uncle, Fr Frank Cosgrove, a diocesan priest who has been living and working in the US for the past fifty years vested him with his deacon’s dalmatic and stole.

Before joining the Jesuits, Eddie Cosgrove studied engineering to doctorate level. He worked as a civil engineer for a number of years in Dublin.

His interest in and contact with the Jesuits came through discovering and joining a Christian Life Community group (CLC) in Dublin.

He took some time out to volunteer with Jesuit apostolates in social outreach programmes, and also to complete an MA in Applied Christian Spirituality.

He entered the novitiate in Birmingham in 2007 and made his First Vows in St Mary’s Church, Harbourne, Birmingham on 5 September 2009.

He studied Philosophy at Heythrop College in London and later completed two years of Regency in Galway, where he was part of the Chaplaincy team at Coláiste Iogonáid and also taught Religion and Mathematics.

Among the Jesuit apostolates he assisted as part of his formation, were Magis young adult ministry and Gardiner Street Parish.

Eddie has recently completed his basic theological studies and will continue studying for a Masters in Divinity in Regis College for a further year in Toronto.

During the coming weeks he will minister as a deacon at St Ignatius Parish, Winnipeg, Manitoba where he will also work in prison ministry – a ministry very close to his heart, having recently worked with prisoners in the USA.

He has developed a deep interest in the social apostolate and to ministering to the poor and those ‘on the margins’.

In July he will return to Ireland for a visit which will include a short period of work at St Francis Xavier Church, Dublin.

Throughout his formation Eddie has blogged about many aspects of his life as a Jesuit, including his experiences as a scholastic studying in London when writing for Catching Fire, a blog by young scholastics; and also his experience in Rumbek in 2013 assisting the Multi-Educational Agricultural Jesuit Institute of South Sudan (MAJIS), a project established by the Jesuits of East Africa, and supported by Irish Jesuit Missions.