Faith leaders call for peace and reconciliation in Pakistan

Leaders of Christian and other religious communities in Pakistan have expressed the wish that 2014 will be “a year of peace and reconciliation”.

The leaders made their appeal during an interfaith meeting in Lahore.

The Archbishop of Lahore, Mgr Sebastian Francis Shaw OFM, said of the meeting that “the effect of dialogue among us is to make us get closer to one another and to eliminate fear and suspicion.”

He explained that Pakistan is “very fertile for dialogue” and that Church leaders believe in a merciful God who gives hope and energy to live together.

“It is nice to see and hear prayers for peace rise from churches, mosques, Hindu and Sikh temples: this helps to create an atmosphere of harmony in the country,” he said.

In September 2013, two suicide bombers attacked the 130-year-old All Saints Anglican Church in Peshawar in the north of Pakistan killing more than 120 people and injuring 200.

At the time, the Catholic Bishops’ Conference described the attack on innocent men, women and children while praying in the church as a shameful act of cowardice.

So peace was high on the agenda at the meeting in Lahore, which was organised by the Council for Interreligious Dialogue, and its stalwarts like Fr Inayat Bernard and Fr Francis Nadeem OFM Cap.

Other religious leaders who spoke out at the meeting included Sohail Ahmed Raza, head of the Muslim youth organization Minhaj-ul-Quran, who said he hoped that 2014 would be “the year of lasting peace in Pakistan”.

Another leader, Mufti Muhammad Ashiq Hussain, head of the local madrasa (Islamic school), spoke of the Christmas message of peace, saying that inter-religious encounters “help Pakistanis to grow in mutual respect and build a prosperous Pakistan”. 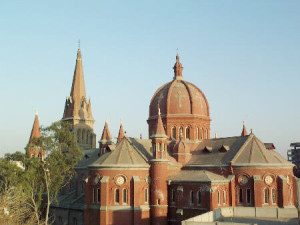 The Cathedral in Lahore, Pakistan.

The Sikh leader Sardar Gernail Sing said that “it is urgent to say to all of our children to be close to each other because our country is a peaceful place where to live”.

The Hindu leader Bhagat Lal pointed out that “it is a good tradition that leaders and believers of all faiths continue to meet often, we are all Pakistanis and we want peace in our country”.

A new report has stated that globally Islamist persecution is set to rise in 2014.

“2014 looks set to be a turbulent year for Christians, especially ahead of elections in Nigeria and Afghanistan,” Colin King, UK director of Release International, which supports and highlights the persecuted Church worldwide, said.

There are concerns about the Federal Sharia Court’s move to impose the death penalty for blasphemy, states the report and that this could increase intolerance and lead to further attacks against Christians.