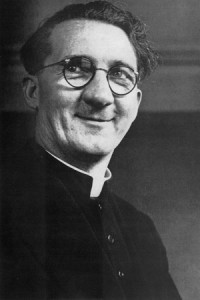 Nominations are being sought for this year’s Hugh O’Flaherty Award, which holds a particular significance due to the fiftieth anniversary of the Co Cork-born prelate’s death falling in October.

The Hugh O’Flaherty Memorial Society is seeking nominations of a person or an organisation doing outstanding humanitarian work.

The sixth annual award will be presented in Killarney between 27 October and 3 November and will coincide with the anniversary of Mgr O’Flaherty’s death on 30 October 1963.

The award honours the priest’s role in saving the lives of 6,500 Jews and allied prisoners of war during World War Two.

Monsignor Hugh O’Flaherty was a Vatican diplomat who served in Rome during World War II. He was the first Irishman named as a notary in the Vatican’s Holy Office.

He used his status as a member of the Curia as well as the neutrality of the Vatican to rescue thousands of Allied prisoners of war and Jews whom the Nazis sought for their death camps. Between 1943-1944, the Irish priest was one of the most wanted men in Rome.

From the Vatican, the prelate developed a network of contacts that provided money and food to help those whose lives were in danger.

He often undertook his negotiations in disguise, which is why he became known as ‘the Vatican Pimpernel.’

Mgr O’Flaherty was awarded the CBE by the UK and the Congressional Medal by the US.

Eight million people watched him on BBC’s ‘This Is Your Life’ television programme in 1963. A film, ‘The Scarlet and the Black’ was made about his life in 1983 and starred Gregory Peck as Mgr O’Flaherty.

Nominations should be submitted in writing and the reasons for the nomination should be given in no more than 500 words. The closing date is Friday 23 August and the recipient will be announced in early September.